Another Winter of COVID

The coronavirus pandemic in the United States appears, for the moment, to be in retreat. Since the start of September, daily cases have dropped by a third, and daily hospitalizations have fallen by more than a quarter. COVID deaths, which generally lag behind infections by a few weeks, are now starting to decline from their peak. There are still areas of the country that are struggling. In Alaska, where only half the population is fully vaccinated, hospitals are at capacity and doctors have had to ration intensive care. But, nationwide, the Delta wave is waning. The question now is: What does the winter hold? 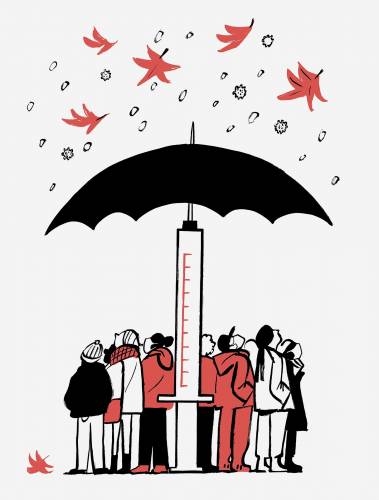 There are reasons for optimism. Seventy-eight per cent of adults in the U.S. have now received at least one dose of a COVID vaccine, and recent mandates are pushing this number higher. Millions of vulnerable Americans are now getting booster shots, and by Halloween Pfizer-BioNTech’s vaccine may be authorized for use among children aged five to eleven. Earlier this month, Merck announced that its antiviral drug molnupiravir roughly halves the likelihood that people with mild or moderate COVID will be hospitalized or die. Because the drug is administered orally—not by infusion or injection, as monoclonal antibodies are—it could dramatically change how COVID is treated outside of hospitals, and result in fewer people ending up inside them. Meanwhile, rapid antigen tests, which can help schools and workplaces open more safely, appear to be on the brink of widespread use. This progress is unfolding against an epidemiological backdrop in which at least a third of Americans have been infected by the virus and carry some level of natural immunity.

But there’s also a less promising scenario. The U.S. has the lowest vaccination rate among wealthy democracies, and has now fallen behind many poorer nations, such as Uruguay, Cambodia, and Mongolia. The anti-vaccine movement remains a potent force. Last Monday, protesters tore down a COVID testing site in New York City. According to the Kaiser Family Foundation, one in six adults nationwide remains adamantly opposed to vaccination; only a third of parents say that they plan to get their children inoculated immediately after the vaccine is authorized, and a quarter say that they “definitely” won’t. In the U.K., ninety-seven per cent of people over sixty-five are fully vaccinated; during the Delta wave there, daily cases reached eighty per cent of record levels, but daily deaths only eleven per cent. Just eighty-four per cent of older Americans are fully vaccinated, and cases and deaths are more tightly coupled: both recently reached around two-thirds of last winter’s levels. “Are we going to have as bad a surge this winter as last winter?” Ashish Jha, the dean of Brown University’s School of Public Health, asked. “I think we can definitively say no. But what people don’t appreciate about Delta is that it finds pockets of unvaccinated people and just rips through them. If you’re an older person living in this country, and you’re not vaccinated, it’s going to be a very bad winter.”

During the past year and a half, the virus repeatedly surprised us, prompting public-health revisions, reversals, and mea culpas. It’s never been clear why the virus surges in one place and not another, why it fades when it does, or how it will evolve next. Any number of factors can introduce uncertainty into our prognostications, and each threatens to push “normal” beyond yet another horizon. Still, it’s possible to wrap our heads around some of the biggest issues. One is in-person contact. When societies open up, rates of infection almost always increase. In the U.S., most business closures and strict capacity restrictions are ending; in-person instruction has resumed at schools and colleges; the weather is cooling, and we are spending more time indoors. All this means that the virus will have more opportunities to spread.

The consequences of that spread will depend, in part, on how many people remain susceptible and to what extent immunity wanes. The passage of time may be especially problematic for communities with high rates of prior infection and low levels of current vaccination. A recent C.D.C. study in Kentucky found that people who had previously been infected but never got vaccinated were more than twice as likely to be reinfected as those who got immunized after contracting the virus were. Among vaccinated people, breakthrough infections, while unnerving, remain uncommon and generally mild, even with the Delta variant, but the chance that a breakthrough will develop into a serious illness seems to increase with time, as immunity ebbs, especially for older people. Our collective immunity will rise and fall, through some combination of booster shots, repeat infections, and time. “It’s like painting the Golden Gate Bridge,” Robert Wachter, the chair of medicine at the University of California, San Francisco, said. “The minute you’re done, you have to get started all over again.” Complicating all this is the possibility that a new coronavirus variant could unsettle whatever equilibrium we reach.

Only two per cent of people in low-income countries have received even a single dose of a COVID vaccine. This is both a moral and a public-health failure: each week, thousands of people around the world die a vaccine-preventable death, and, as the virus continues to circulate unchecked, the probability of ever more dangerous variants rises. In June, the daily coronavirus case counts in the U.S. were a tenth of what they are today, and lower than at any point since the start of the pandemic. Then came Delta, and nearly a hundred thousand American COVID deaths. “What happens next depends a lot on whether this virus evolves into an even worse strain,” Eric Topol, the director of the Scripps Research Translational Institute, said. “We don’t have this thing contained globally. Heck, we don’t have it contained here. So far, the U.S. hasn’t been home base for a major new variant. Alpha, Beta, Gamma, Delta—they all came from other parts of the world. But we are such an epicenter that, in the future, we could be the Greek-letter originator.”

There’s only so much that individuals can control about the viral threat they’ll face this winter. But whether our immune systems are prepared will be determined by the choices we make today. Gaps in vaccination rates of a few percentage points can be hugely consequential, especially when the lower rates are concentrated in certain communities and high-risk groups. Perhaps the safest prediction is that reopening, variants, and immunity will combine in disparate ways for people, depending on their age, health, and risk tolerance, as well as their neighbors’ decisions. We all walked into this pandemic together. But we’ll leave it at different speeds, and at different times. ♦

Previous : Why nuclear plants are shutting down
Next : Laurie Colwin’s Recipe for Being Yourself in the Kitchen