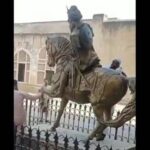 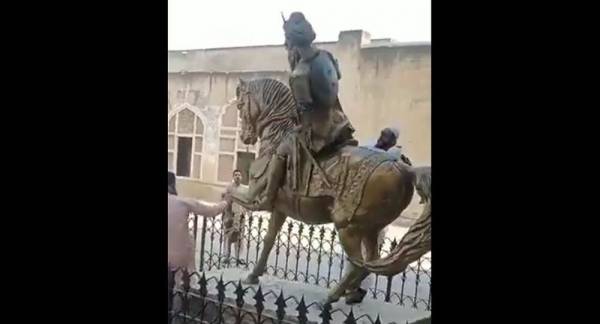 A nine-foot bronze statue of Maharaja Ranjit Singh, the first emperor of the Sikh Empire who ruled over Punjab for nearly 40 years and died in 1839, was erected at the iconic Lahore Fort in June 2019.

A bronze statue of erstwhile Sikh Emperor Maharaja Ranjit Singh was vandalised on Tuesday by members of the Pakistani political party Tehreek-e-Labbaik, Indian daily Hindustan Times reported, adding that at least one suspected perpetrator was detained.

The statue was erected in Lahore city in the country’s Punjab province in 2019 to mark the 180th anniversary of the ruler.

A video of the incident that emerged on social media shows a man in ethnic Kurta-Pyjama attire vandalising the statue of the Sikh emperor before another man jumps inside the enclosure in an apparent attempt to calm the attacker and drag him off the monument.

Several Indians have shared the video, expressing outrage at such a display of “excessive hatred”.

​The reasons of the attack on the statue remain unclear as of now.

​This is not the first time in recent years that the statue has been vandalised. The same group, Tehreek-e-Labbaik, vandalised the statue in December 2020, saying it was not right to erect a Sikh emperor’s statue in Pakistan.