Americans do not see all Afghan refugees as equal 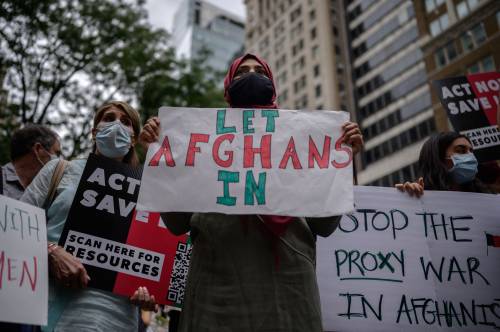 Though Americans largely support efforts to resettle Afghan refugees in the US, they are considerably more likely to welcome Afghans who worked directly alongside US troops during the 20-year war effort as compared to those who didn’t.

A new poll by Vox and Data for Progress conducted September 17 to 20 found that 74 percent of likely voters — including 78 percent of Democrats and 66 percent of Republicans — favored resettling Afghans who were US military allies such as translators or special forces.

Fifty-eight percent of people polled, including 73 percent of Democrats and 40 percent of Republicans, supported resettling in the US Afghans who fled violence and persecution from the Taliban as it implements its vision of religious law. That’s still a majority of likely voters. But it suggests that there are artificial limits to some Americans’ will to protect vulnerable refugees as immigration has become a political wedge. 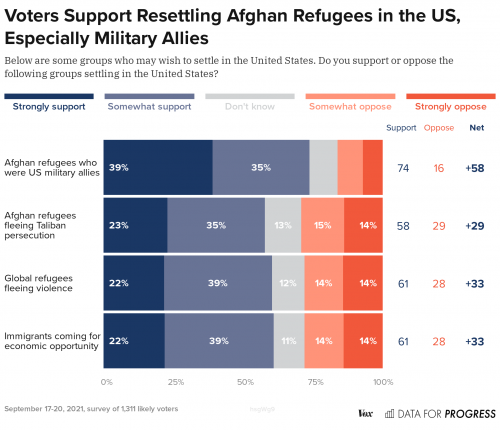 The discrepancy might be due to the perception among some Americans that they owe a unique debt to Afghans who put their lives on the line for US troops and that it is their responsibility to meet the military maxim of leaving no one behind, even if they might not otherwise take a liberal stance on immigration issues.

But some Americans might not feel the same level of ownership over the plight of Afghan civilians — including NGO workers, gender rights activists, and other minority groups — even though America’s withdrawal and failed nation-building efforts have put them at risk.

It’s a sign that the once bipartisan consensus on America’s role as a global humanitarian leader has deteriorated and that right-wing efforts to turn voters against refugees might be working. Republicans including former President Donald Trump, House Minority Leader Kevin McCarthy, Texas Sen. Ted Cruz, and Ohio Senate candidate J.D. Vance have all incorrectly argued that arriving Afghans are not being properly vetted for potential terrorism threats when, in fact, they are required to undergo thorough security screening in third countries prior to getting on a flight to the US, in addition to health screenings and vaccinations.

For Republican voters who were attracted to Trump’s anti-immigrant rhetoric in 2016, regardless of its truth, such sentiments might be a message that resonates in next year’s midterms.

Americans are less likely to favor Afghan resettlement if it’s happening in their own backyards. Per the Vox and Data for Progress poll, 53 percent said they would support resettling Afghan evacuees in the US as a whole, but 48 percent said they would support doing so in their states and just 44 percent would welcome them into their own communities.

Among independents, there appears to be a particularly large gap — about 11 percentage points — in support for resettling refugees in their own community versus the US overall. And among Republicans, support for resettlement was below 33 percent, regardless of where the refugees would go. 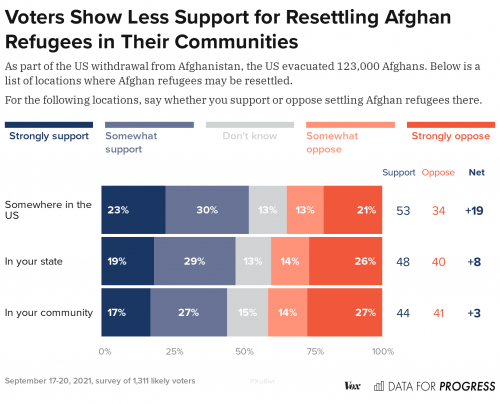 This is unfortunate, as even aside from the obvious altruistic case for helping vulnerable populations, Americans should be clamoring to bring refugees into their communities for selfish purposes, too.

As Vox’s Jerusalem Demsas writes, “In small towns or declining cities, they can help reverse depopulation trends that threaten the financial viability of the region. Even in growing places where many people seek to live and work, refugees provide a clear economic benefit.”

Economists broadly agree that population growth fuels economic growth in wealthy countries. But the US is seeing dramatic decreases in population growth, and some parts of the US are already beginning to experience some of the downsides: Shrinking tax bases in rural areas have made it harder for government budgets to support essential services, such as infrastructure and public schools. As population growth slows, the pressure for cuts will likely grow. Meanwhile, the existing population continues to age; by 2030, the Census Bureau estimates that one in five US residents will be of retirement age.

With 80 percent of Americans living in counties that lost population over the past decade, an influx of refugees could help stave off demographic decline.

Refugees are also employed at higher rates than native-born Americans after six years of living in the US and pay an average of $21,000 more in taxes than they receive in benefits over their first two decades in the country.

There are some ways that policymakers could encourage states and localities to opt for more refugee resettlement. President Joe Biden has already announced that he intends to raise the annual cap on refugee admissions to 125,000 starting in October, a move that less than half of likely voters support, according to the Vox and Data for Progress poll. (Some Afghan refugees may not be immediately affected by the cap because of how the US has classified them.)

Biden is also seeking to create a private refugee sponsorship program, which would allow private organizations and groups to financially support even more refugees for resettlement in the US. Additionally, there have also been various proposals, some endorsed even by Republican governors, to create a state‐​based visa program that would allow participating states to increase their immigration levels based on local labor market needs.

There is a clear economic case for resettling Afghan refugees in the US, and one that could shift attitudes about refugees becoming people’s neighbors. But it is up to both Democrats and Republicans to make it — and to create avenues for states and communities to welcome them.

We have a request

In moments like this — as people grapple to understand variants and vaccines, and kids head back to school — many outlets take their paywalls down. Vox’s content is always free, in part because of financial support from our readers. We’ve been covering the Covid-19 pandemic for more than a year and a half. From the beginning, our goal was to bring clarity to chaos. To empower people with the information they needed to stay safe. And we’re not stopping.

To our delight, you, our readers, helped us hit our goal of adding 2,500 financial contributions in September in just 9 days. So we’re setting a new goal: to add 4,500 contributions by the end of the month. Reader support helps keep our coverage free, and is a critical part of sustaining our resource-intensive work. Will you help us reach our goal by making a contribution to Vox with as little as $3?

Previous : We can’t see the Big Bang directly. But a future telescope could.
Next : Why this Facebook scandal is different