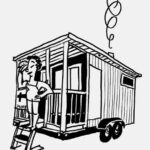 The Finnish Obsession with Sweating

In the sauna, the body asserts itself: essential, unavoidable, a fleshy fact of being. In the Finnish tradition—the original, Finns will argue—you’re naked, sitting near a wood-burning stove in two-hundred-degree heat, in a structure the size of a garden shed, pouring water on hot stones for a scalding hit of löyly, sauna steam, like some heat-seeking junkie. Stay long enough, and the mind may clear, the body may melt; then löyly! Enlightenment. 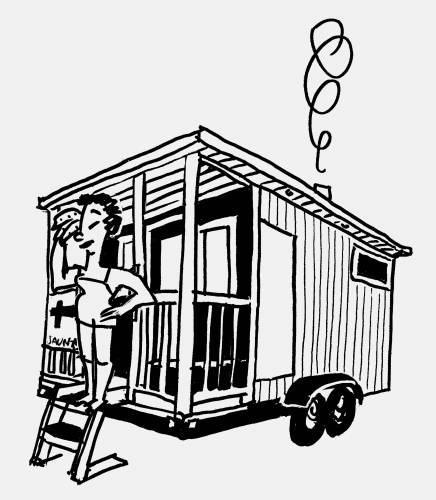 Risto Sivula, a Finn from north of Helsinki who now lives in St. Paul, Minnesota, has, for the past eight months, been driving around the country with a portable sauna attached to the back of his pickup truck. “We have about fourteen thousand miles on it so far, and about nine hundred and fifty people have taken a sauna.”

On a recent Sunday, Sivula parked the sauna (red-painted wood, with white-trimmed windows) in a yellow-cab lot near the Brooklyn Cruise Terminal, in Red Hook. He wore shorts and a T-shirt that read “Finland 100,” the official slogan of the hundredth anniversary of Finland’s independence from Russia. “We knew there was a lot of chatter amongst Finns in America that we will be celebrating the centennial,” he said. “So we came up with this idea. If you think about Finland, what’s the one thing that comes to mind? A sauna. Can you name anything else that’s recognizably Finnish?”

Meatballs? “Swedish,” Sivula said. “There are actually a lot of Finnish things, even in your home. Those scissors that have orange handles? Fiskars? That’s a Finnish brand.” Also, graphic paper cups; Nokia cell phones; various cruise ships; Kone, one of the world’s largest elevator companies; and a patented method for smelting copper. “Finnish companies don’t really advertise being from Finland,” Sivula said. He lowered his voice. “Not like our neighbor to the west. IKEA everybody knows is Swedish. H&M: Swedish. Volvo: Swedish. Finns like to say, ‘We got a nice paper cup for you!’ ” He let out a booming laugh.

It’s a question of branding, he said. For Finland, he went on, “you would have to first define the brand: What is it? Is it ‘pure nature’? Is it the one hundred and eighty-eight thousand lakes we have?” He paused. “If you put Minnesota and Iowa together, that’s about the size of Finland, and about the shape of it, too. And the Arctic Circle goes in about two-thirds up.”

To the sauna (“sow-na,” as Finns will tell you), then. In Red Hook, two dozen people in swimsuits were lined up. Mari Lipponen, a Finnish-American, had just emerged. “What Americans don’t get about saunas is it’s a relaxing, almost spiritual experience,” she said. “My father was born in the sauna. In 1933, it was the cleanest place on the farm.”

“It was a place for birth and death,” Anu Leinonen, a Finn who moved to New York two years ago, said. “We had a President in the seventies and eighties who used to lead his political meetings in the sauna. Putin would understand the sauna. If Trump wants any hints on how to deal with the Russians, we can advise.”

Sivula quoted a popular statistic: “Finland is a country of five and a half million people. We have three million cars over there, and we have two million saunas.” (Finland once promoted a sauna emoji as part of a patriotic series.) “You can cook in there,” he said. “We used to make sausages all the time.”

Finnish saunas are hard to come by in New York City. “So we have tried to be very creative,” Saku Nousiainen, who came to the United States from Finland on a Fulbright scholarship to study jazz, said. He ticked off the city’s other so-called saunas, which he occasionally patronizes: Mermaid Spa, in Coney Island; the East Village Russian baths; the Wall Street banya, on Fulton Street.

Paula Wegman and Jackie Aude M., two non-Finnish Brooklynites in their thirties, hope to launch a mobile sauna startup in Bushwick and Ridgewood, called HotBox. They were introduced to the Finnish practice by a friend. “You feel amazing, like you could hit the sack and have the greatest slumber you’ve ever had,” Wegman said. “New Yorkers work hard, they play hard, but where do they relax?”

“It’s probably the truest sense of community,” Aude M. said. “Just going in there super vulnerable, sweating your ass off, and really connecting.”

Inside the mobile sauna, the temperature approached a hundred and eighty degrees. Sami Marttinen, a transplanted Finn, bent over a bucket of water with a ladle. “Some water?” he asked. “Heat?”

Noora Erkkilä, a Finn who works at the United Nations, said, “Yeah, last round.”

Marttinen poured water on the rocks; the steam that burst forth was blistering. A novice admitted that a Swedish iteration hadn’t been as hot.