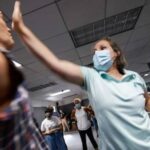 With unruly passenger incidents on the rise, flight attendants turn to self-defense training 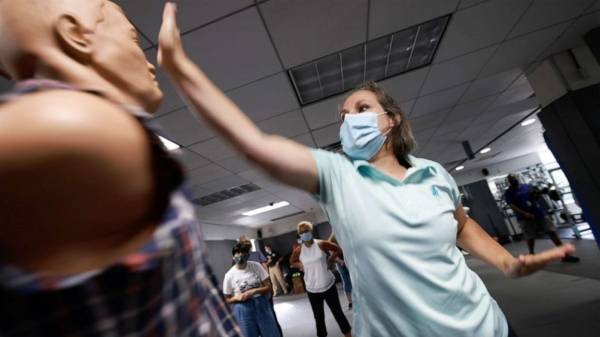 The “friendly skies” are becoming almost unrecognizable, with record numbers of flight attendants being verbally and physically attacked on flights.

The Federal Aviation Administration received 3,810 reports of unruly passengers this year alone – 2,786 of those involving travelers who refused to wear a mask.

As a result, flight attendants are increasingly turning to self-defense training to learn how to defuse situations as well as protect themselves and their passengers.

“I think people are just kind of just at a tipping point with the pandemic,” Robin Gilinger, a flight attendant, said. “And when they’re up in the air at 35,000 feet, there’s no one to stop them. There’s no police officer on the corner they can go to. It’s just the flight attendants.”

ABC NewsStasia Gardner, a flight attendant, learning how to respond to an attack from a passenger.

“This is actually the second time I did it, because I think it’s very important that we actually keep getting a refresher course on it,” Stasia Gardner, another flight attendant who took the course, said.

The courses had been paused amid the pandemic. Now they’re back up and running with four times the amount of classes and double the number of attendees as before.

“The philosophy we teach always addressed unruly passengers and how to control them,” Jay Koury, supervisory federal air marshal in charge, said in an interview with ABC News. “The assaults and the disruptions on the aircraft are higher now than they have been in in recent memory to me. But the one thing that hasn’t changed is the teamwork between the flight crews and the air marshals.”

During the four-hour course, air marshals teach flight attendants various de-escalation techniques, as well as how to defend themselves should a passenger become violent.

“We’re not here to beat our passengers. We’re here to stop the unrest that has precipitated through this pandemic,” Gilinger said. “And this provides really good, basic tools, not just for the aircraft.”

While this type of training is free, flight attendants must come on their own time and pay for their travel and lodging. The head of the country’s largest flight attendant union is pushing for the government to make the course a federal mandate.

ABC NewsFederal Air Marshals teaching flight attendants how to respond if a passenger brings a knife on board an aircraft.

“This is the biggest direct threat to flight attendants that we have ever faced,” Sara Nelson, flight attendant and president of the Association of Flight Attendants-CWA, told ABC News. “It really is something that should be a part of our regular training with repeated muscle memory actions so that you can respond so that you’re not in shock and you can respond to those immediate actions.”

Nelson is also pushing for stricter repercussions for unruly passengers. Earlier this year, FAA Administrator Steve Dickson said his agency would take a “zero-tolerance” approach to these incidents — handing down stricter punishments without warning, including fines of up to $35,000 and imprisonment.

“Flight attendants are saying they don’t recognize this job,” Nelson said. “We have a lot of stories of kicking and punching and, my gosh, urinating and spitting and throwing trash at places and really disrespectful, awful name calling and threats.”

Nelson is calling upon the Department of Justice to “publicly prosecute” these individuals.

“The point is that when you put your uniform on today, instead of thinking this is a one off that could happen, you’re putting it on and that’s the target,” Nelson said.

There have been some recent arrests, including a woman who was charged with battery causing serious bodily injury in May after punching a Southwest flight attendant in the face and knocking out two of her teeth.

ABC NewsThe country’s largest flight attendant union is pushing for the course to be federally mandated.

A DOJ spokesperson told ABC News that “interference with flight crew members is a serious crime that deserves the attention of federal law enforcement.”

“As with any case, we exercise prosecutorial discretion in deciding which cases to charge federally,” the spokesperson said. “Factors include egregiousness of the offense, were lives in danger, victim impact, mental health, did the plane have to make an unscheduled landing, is this a repeat offense, are there mitigating factors, etc. This is a serious crime that carries a maximum penalty of 20 years in prison.”

“I need to always make sure that I’m fully prepared not just for myself, but for my crew members and for you as my passenger,” Gardner said. “I might have to use this tomorrow. I hope I don’t, but you might have to.”

Previous : Don’t Ask Why: Swiss Mathematicians Set New World Record by Calculating 62.8tn Figures to Pi
Next : US Has No Evacuation Plan for Americans Outside Kabul Beyond ‘Shelter in Place’ Order, Media Claims