It might seem that the French chef Daniel Boulud, a master of the fine-dining universe in New York City and beyond, has so many exceptional restaurants—including Bar Boulud; Boulud Sud; his flagship, Daniel; and even his grab-and-go café, Épicerie Boulud, which peddles impeccable madeleines and sirloin panini—that he has nothing left to prove. And yet when, five years ago, developers approached him to open a restaurant in the new midtown skyscraper One Vanderbilt (which also features, a thousand feet in the air, a mirror-and-glass public observatory “experience” called Summit), the chef saw an opportunity to infiltrate the heart of Manhattan. 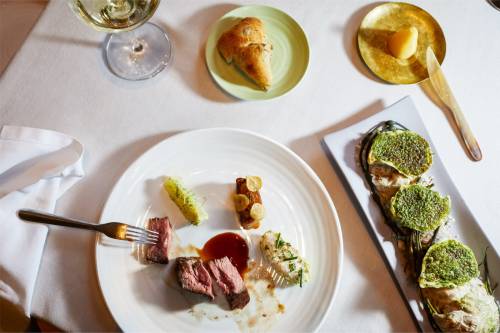 Le Pavillon, which opened in May, proclaims itself “vegetable-forward and seafood-centric”; only three of the twelve main dishes feature meat.

Boulud’s vision for Le Pavillon—named for a French restaurant that originated at the 1939 New York World’s Fair and went on to become a Manhattan stalwart from 1941 to 1971—was “to create an oasis of peace and harmony,” he told me, “in contrast with the location, which is very bustling.” Indeed, the showpiece of the space, a welcoming square bar—cutely named Bar Vandy, presumably to signal a shift, for Boulud, to a more carefree, fun atmosphere—is privy to a spectacular view of Grand Central Station, its taxi stand, and the glittering Chrysler Building. A fanciful blown-glass chandelier, by the artist Andy Paiko, drips from the room’s cathedral ceiling; a grove of olive trees and verdant plants line the long, hushed dining room’s banquettes and walkways. 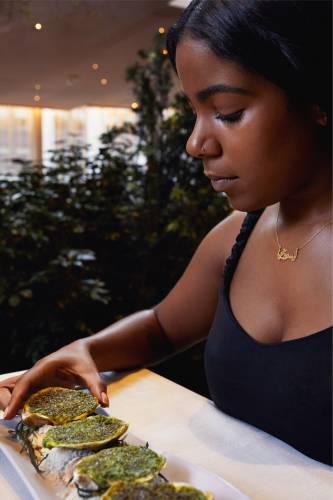 Oysters Vanderbilt are made with John’s River oysters, from Maine, which are poached in a chowder fortified with potatoes, leeks, crème fraîche, and hazelnuts.

If you’re not seated near the view, you might pass through the lovely foliage to reach the Siberia of Le Pavillon, a back corner behind a massive column, close to the kitchen door. There, beige upholstery and semi-sheer curtains incapable of concealing the Chick-fil-A across Forty-second Street evoke, slightly, a Hilton Hotel in Toronto. But the warm, extremely attentive service—and the food—makes you forget all that. 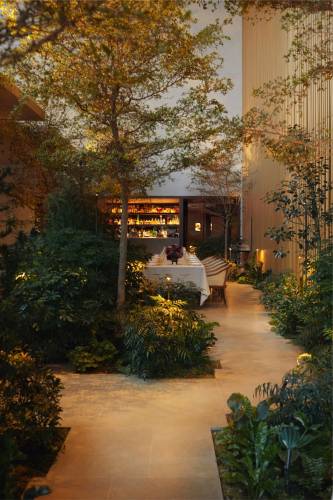 Diners choose, from the prix-fixe menu, one each from a vast list of appetizers, entrées, and desserts.

On its Web site, Le Pavillon, which opened in May, only three months later than scheduled, proclaims itself “vegetable-forward and seafood-centric”—an undoubtedly au-courant, and responsibly proactive, position. Diners choose, from the prix-fixe menu, one each from a vast list of appetizers (twelve dishes, none with meat), entrées (also twelve, three with meat), and desserts (no meat, but cheese). On a recent night, a perplexing amuse-bouche included celery root, Concord grape, and a wisp of wasabi; earthy, pasty, and hard to identify, it was an unusually dour note in an otherwise fairly symphonic meal. 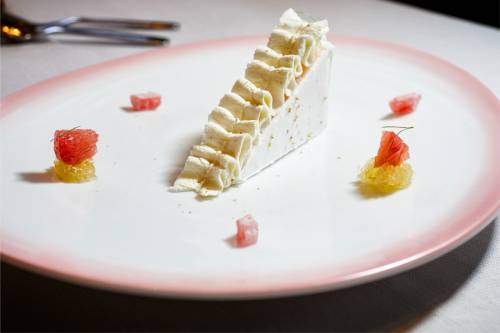 One of the desserts is a grapefruit-and-fennel vacherin.

Begin, in earnest, with oysters Vanderbilt, a World’s Fair-worthy invention. “You’ve heard of oysters Rockefeller?” Boulud said. “Vanderbilt built Grand Central Station, he built the Grand Central Oyster Bar, but he never had his own oysters.” Now he does: plump John’s River specimens, from Maine, are poached in a chowder fortified with potatoes, leeks, crème fraîche, and hazelnuts, all spooned into oyster shells and topped with a crust of seaweed, parsley, butter, and more hazelnuts. It must be said: Vanderbilt finally beats Rockefeller in the race to the richest. 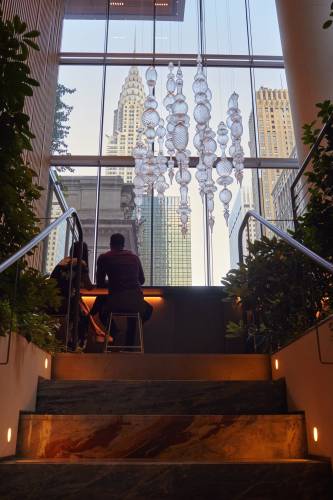 A fanciful blown-glass chandelier, by the artist Andy Paiko, drips from the room’s cathedral ceiling.

One thing that you’re sure to get at a Boulud restaurant—and, perhaps, the reason you came—is a plethora of techniques meant to elevate the essence of an ingredient. Here this happens time and again: an emulsion accompanying a Vidalia-onion tart tastes like pure, liquid Époisses cheese. A dark, clear broth poured around a hefty slab of halibut, layered with Martha’s Vineyard shiitakes, imparts potent mushroom umami. Juicy duck with plum sauce sits near a delightful roasted turnip stuffed with duck forcemeat, a modern take on canard aux navets. A miniature potato gratin that accompanies the Angus strip loin is glazed in a beef-stock reduction and crisped into one tiny, ideal beef-and-potato meal.

For dessert, make sure that someone good at sharing gets the Noisette Chocolat, for the quintessential Boulud pièce de résistance: controlled whimsy, precise geometry, silken mousse, flawless chocolate coating, a crumbly, nutty praline croustillant, and a strong hit of salt. (Three-course menu $125.) ♦

Previous : The Insurrection of Surrealism
Next : Wall Street doesn’t care about the Facebook leaks. Mark Zuckerberg does.