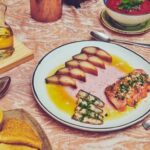 Outside of Eastern Europe and Brighton Beach, most Russian-inspired restaurants tend to function as ostentatious culinary embassies for the motherland. Establishments such as Mari Vanna and the Russian Tea Room are not places to eat so much as Epcot pavilions, theatrically calling attention to their Russianness and leaning on tropes—chandeliers, crimson carpets, ornamental samovars—to conjure the stuffy atmosphere of an imperial ball. For a time, the theatre district was home to FireBird, which employed grown men to dress up as Cossack warriors and solicit passersby to “dine like a tsar.” Against this backdrop of unrestrained kitsch, Tzarevna, a modern, elegantly minimalist Russian restaurant on the Lower East Side—where the focus lies on the food, which is superlative—comes as a kind of spiritual relief. 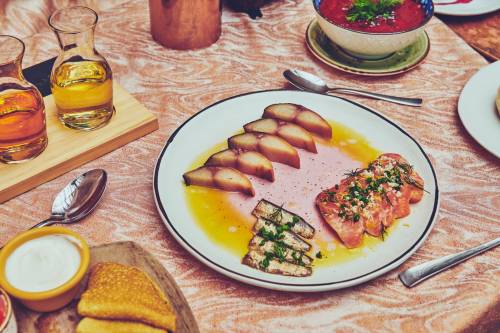 Several nights a week, Dolinsky visits the New Fulton Fish Market, in Hunts Point, where he hand-selects an assortment of fish, which he then brines or smokes, and serves with blini.

“We want to be unmistakably Russian,” Ricky Dolinsky, Tzarevna’s twenty-seven-year-old head chef and co-owner, told me the other day, “but we want to be more chill about it.” Dolinsky, who is of Ukrainian and Taiwanese heritage, grew up in New Jersey; his wife and business partner, Mariia, is from Magnitogorsk, a large factory town a thousand miles east of Moscow. (“It’s like Russia’s Pittsburgh,” she said.) When they opened the restaurant, in the spring of 2019, Dolinsky aspired to create a menu that was “accessible but still chefy.” He put a swirl of olive oil in the borscht, as a kind of aesthetic embellishment. “It did not go over well with Soviet parents,” he said. Then there was the awkward and unprofitable Cornish hen tabaka, for which Dolinsky flattened a small bird with a brick in a cast-iron pan. “But no one ordered it—because it was a Cornish hen,” Dolinsky explained. “Of course it’s delicious and perfect, but it’s just so weird and uncool.” He swapped out the whole hen for half an organic chicken, presented with a pungently tart barbecue sauce made from dried alucha (Georgian sweet-and-sour plums), which Dolinsky rehydrates and mingles with cumin, fenugreek, and dill seed.

When the pandemic hit, the couple abandoned the fine-dining concept for good. As Dolinsky tells it, Mariia came to him and said, “Dude, just let it go.” He let it go. “The people wanted comfort food,” he said reflectively. “They wanted some babushka cooking.” By his own estimation, Tzarevna is now “a Russian diner.” Comrades, Tzarevna is not a Russian diner. Almost every item that I sampled felt familiar, but in several instances it was the best version of a classic dish that I’ve ever had. 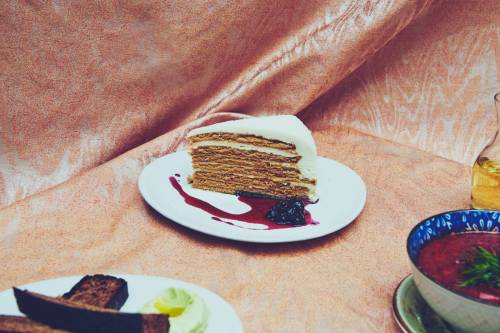 My own Siberian-born babushka, it must be said, does not go to the trouble of stewing short ribs for eight hours when she makes borscht. Nor does any babushka in my circle incorporate delectably astringent homemade garlic mayo into her spin on herring under a fur coat, an already laborious dish that involves prepping and layering potatoes, carrots, hard-boiled eggs, and beets atop pickled herring. Again with all due respect to Grandma, several nights a week, at 2 A.M., Dolinsky drives to the New Fulton Fish Market, in Hunts Point, to handpick sardines, mackerel, and Faroe Island salmon, which he then brines or smokes before lovingly arranging them on a fish board, garnished with olive oil, lemon zest, dill, chives, and horseradish and served with diaphanous, delicately folded blini. Come on, Grandma, put some muscle into it. 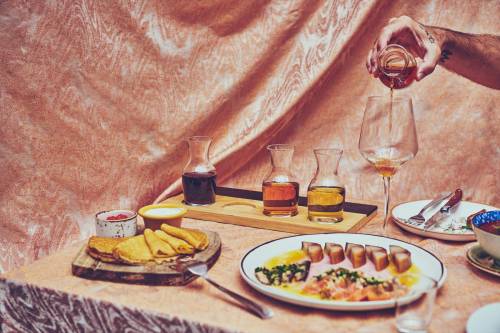 The Georgian wine sampler showcases four varieties from two regions—a white and a rosé, from Imereti, in western Georgia, and a red and an amber, from Kakheti, in eastern Georgia.

Perhaps the greatest testament to how much care the Dolinskys put into their food is their seven-layer medovik, or honey cake. It can be made many ways; Tzarevna’s is light and airy and frosted with heavy cream whipped with condensed milk. Crucially, it contains real honey, and not just any honey—this is honey that Mariia’s recently departed grandparents, who were lifelong recreational beekeepers, produced in bulk in their final years. It contains the flavors of all the local Ural flowers that their bees drew upon, what beekeeping enthusiasts call terroir. How did they get it here all the way from Russia? Dolinsky smiled. “We smuggled it.” (Entrées $14-$35.) ♦