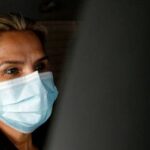 Ex-Bolivian President Anez Tried to Harm Herself While in Jail, Government Minister Says

Just this Wednesday, the ex-president was reportedly taken to a hospital in El Alto, western Bolivia, without prior notification, for already the third time in two weeks. At the time, local media, citing Anez’s family, stated that she was likely to get a CT scan.

Former Bolivian President Jeanine Anez, who is currently under pre-trial detention, tried to injure herself, but her condition is stable, the сountry’s minister of government, Eduardo Del Castillo said.

The government official told the press on Saturday that Anez tried to harm herself in the early morning, but fortunately was not able to do anything serious, and her condition was stated as stable.

The minister also referred to Anez’s recent hospitalizations, assuring reporters that after visits to different health centers in recent weeks, the medical examinations that were carried out show that the former president is in healthy enough condition to continue with her pre-trial detention in Miraflores prison.

And another lawyer representing Anez, Luis Guillen, reportedly told the outlet that the self-harm incident was a suicide attempt. The lawyer claimed that during the last five months of detention, the penitentiary facility’s officials incorrectly administered medications, in addition to drugs that were counterproductive to Anez’s health, which may have caused a bout of depression and paranoia that would have led the ex-president to make the decision to end her life.

On Tuesday, an international special panel reviewing the 2019 protest crackdown in Bolivia, during which Anez rose to power, had called law enforcement officials’ conduct a massacre. The commission considered the actions of the law enforcement officers as a massacre, confirming that at least 37 people were killed and hundreds injured, while most of them were civilians protesting against Anez. Following these findings, another case against the former president may be filed.

After the Bolivian opposition, led by Carlos Mesa, claimed that there were numerous irregularities during the October 2019 election, Evo Morales resigned as president and departed Bolivia under military duress in November 2019. In the wake of his ouster, the majority of Bolivia’s top authorities also resigned.

Thus, Anez, who was the opposition vice-speaker of the senate at the time, gained power in the country. Morales has since then referred to the situation as a coup. Anez organized a new presidential election, which was held on October 18, 2020, which was won by Luis Arce, a member of Morales’ Movement for Socialism.

Anez was detained in March on allegations of terrorism, inciting to insurrection, and conspiracy in connection with the suspected coup. Since then, she has been held in jail.