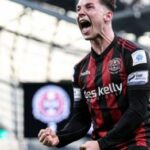 Bohemians secure stunning win over PAOK at the Aviva

Bohemians caused a major upset in their Conference League qualifier after beating Greek side PAOK 2-1 at the Aviva Stadium.

With the away side boasting the likes of former Man United midfielder Shinji Kagawa, Bohs put on a stunning performance to claim the first leg victory.

Scottish winger Ali Coote opened the scoring after a brilliant run from striker Georgie Kelly, who laid it off to his teammate.

With 51 minutes gone, Coote scored once again but this time it was a shot from outside the box that fooled the PAOK keeper.

Bohs have now won each of their three European games at the Aviva Stadium. The second leg will be played in Greece on Thursday, August 12th.

In the same competition, Linfield lost 2-1 at home to Fola Esch from Luxembourg.

Elsewhere, Rangers need to come from behind if they are to reach the playoff round of the Champions League.

Steven Gerrard’s side were beaten 2-1 away to Malmo in this evening’s first leg.

Previous : Premier League players to continue to take the knee ahead of matches this season
Next : Will New York Gov. Andrew Cuomo Survive His Sexual Harassment Scandal & Growing Calls to Resign?