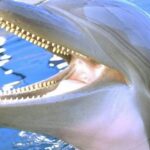 Many probably know that these adorable creatures are some of the most intelligent animals in the world and have a complex form of communication. However, not everyone is aware that when it comes to hanky-panky, dolphins throw off their cutie masks and become violent predators.

Swimmers in the English county of Cornwall have been told to keep a safe distance from a dolphin locals have named Nick, The Sun reported. Several experts who spoke to the newspaper said that the cetacean could be dangerous.

The aquatic mammal was recently filmed playing with a group of people. One of the individuals told The Sun that he had “felt something nudging him from below”.
The news of the dolphin’s flirtatious behaviour made the local wildlife trust issue a warning.

​According to The Sun, this is not the first time that Nick has been noticed in Cornwall. The cetacean was seen playing with swimmers last summer. Katheryn Wise of the World Animal Protection charity said that dolphins are friendly creatures who often engage in playful behaviour, but warned that people always need to be vigilant.

Dolphins are often compared to humans as we have several similarities. Aside from being highly intelligent, the aquatic mammals are some of the few creatures that display self-awareness and use tools to catch their prey. Like humans, they have sex not only for procreation, but also because, well, it feels darn good.

However, also like humans, when it comes to sex dolphins sometimes display behaviour that can be quite dreadful.

Here is a fact that will make you want to forget those family trips to the aquatic zoo:

It’s a not a secret that in nature males sometimes have to fight to win the heart of a female, but dolphins, especially bottlenose dolphins, have taken this to another level.

They form gangs and then effectively kidnap a female. They then coerce her into having sex with them by starving and harassing the victim. Anything goes to “persuade” the female – head-butts, bites, and hits with their tails.

Dolphins are one of the animals that are engaged in infanticide, i.e., both males and females kill their own babies when their partner is not interested in mating (still want to go to see dolphins in aquatic zoo?).

According to National Geographic, dolphins’ sexual appetite is not limited to the opposite sex, with males being flirtatious with other males, and several reports suggest that the cetaceans have even had rumpy-pumpy with humans.

A 2015 documentary titled “Dolphin Lover” tells the story of journalist Malcolm Brenner, who, well, you get the picture…