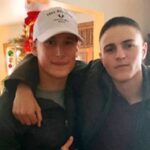 Donations pour in after Marine from Wyoming killed in Kabul

CASPER, Wyo. — Donations are pouring in for the widow and unborn child of a U.S. Marine from Wyoming killed in a bombing in Afghanistan.

Rylee McCollum, 20, was among 13 service members killed by a suicide bomb attack Thursday at the Kabul airport. They were providing security as the airport was overwhelmed with people trying to leave the country amid the U.S. withdrawal and Taliban takeover.

McCollum was from Bondurant and expecting his first child in three weeks, according to his family.

Almost $487,000 had been raised through two online fundraising campaigns, one for the child’s future education costs and one for McCollum’s widow, as of Sunday.

McCollum was on his first deployment and manning a checkpoint at the airport when the attack happened, the Casper Star-Tribune reported.

McCollum attended Jackson Hole High School and competed as a wrestler. He graduated in 2019 from Summit Innovations School in Jackson.

Previous : After 20 year, US ground troops leave Afghanistan, but Americans left behind
Next : Finnish Court Raises Eyebrows as It Drops Incitement Charges Against Swastika Display