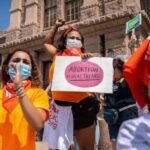 Which states’ lawmakers have said they might copy Texas’ abortion law

In the wake of a severe new abortion law in Texas, some state lawmakers have said they will attempt to mimic the near-total abortion ban.

Although the law is being challenged — and although similar laws have been ruled unconstitutional following Supreme Court precedent — the Supreme Court rejected abortion providers’ call for an emergency injunction to block the law while courts hear the case. It went into effect this week.

This prompted several lawmakers to suggest they would look into similar laws in their own states, while existing similar bills got renewed attention.

Here’s a roundup of the states where these battles are playing out beyond Texas:

Arkansas Republican state Sen. Jason Rapert, who represents the state’s 35th District and is running for lieutenant governor in 2022, tweeted on Thursday morning, “As the original sponsor of the first #HeartbeatBill to pass in America in 2013, today I have ordered a bill be filed in Arkansas to update our law to mirror the Texas SB8 bill.”

Rapert was a co-sponsor of Arkansas Senate Bill 6 (SB6) that was passed earlier this year and signed into law by Gov. Asa Hutchinson. S.B. 6 would create the “Arkansas Unborn Child Protection Act” and would ban most abortions in the state except to save the mother during a medical emergency.

That bill was blocked by a federal judge in July.

Florida’s state legislature is not in session right now, but a Republican state lawmaker currently running for Congress in Democrat Stephanie Murphy’s district (FL-07), Anthony Sabatini, confirmed to ABC News on Thursday that he’s planning to introduce a bill that is the “exact same” as Texas’.

He said the bill is in the drafting stages.

Florida’s Republican Gov. Ron DeSantis hedged a bit more when asked by a reporter about the Texas law at a COVID-19 treatment press conference on Thursday.

“What they did in Texas was interesting, and I haven’t really been able to look enough about it,” DeSantis said. “They’ve basically done this through private right-of-action, so it’s a little bit different than how a lot of these debates have gone. So we’ll have to look; I’m going to look more significantly at it.”

South Dakota Gov. Kristi Noem tweeted Thursday that she’s asked someone in her office to look into Texas’ new anti-abortion law and how it compares to South Dakota’s.

“Following the Supreme Court’s decision to leave the pro-life TX law in place, I have directed the Unborn Child Advocate in my office to immediately review the new TX law and current South Dakota laws to make sure we have the strongest pro life laws on the books in SD,” she tweeted from her official Twitter account.

According to the Guttmacher Institute, a research group that supports reproductive rights, in South Dakota abortion is banned at 20 or more weeks post-fertilization (22 weeks after the last menstrual period) except in cases of “life endangerment or severely compromised health.” The state also has a law on the books, as several others do, that would ban abortion if Roe v. Wade were overturned.

Idaho’s Republican Gov. Brad Little signed a legislature-backed bill in April that, like Oklahoma and Texas, would ban abortions if a fetal heartbeat is detected. But the law would only go into effect 30 days after another federal appeals court allows “a restriction or ban on abortion for a preborn child because a detectable heartbeat is present on the grounds that such restriction or ban does not violate the United States constitution,” according to the bill’s text.

The Associated Press reported on Wednesday that the Texas law, when approved by a federal appeals court ahead of the Supreme Court ruling, nearly triggered the Idaho law. But because the court did not rule on the constitutionality of the law, it did not go into effect.

“We’re excited… and we’re going to keep fighting this legal angle until all preborn babies are protected in Idaho,” president of the Idaho Family Policy Center Blaine Conzatti told the Associated Press.

Montinique Monroe/The New York Times/ReduxA Bans Off Our Bodies protest at the Texas State Capitol in Austin, Texas, Sept. 1, 2021. A Texas law prohibiting most abortions after about six weeks of pregnancy went into effect on Wednesday after the Supreme Court failed to act on a request to block it, ushering in the most restrictive abortion law in the nation and prompting clinics in the state to turn away women seeking the procedure.

Republican legislators in Indiana expressed interest in mirroring the Texas law, but will not be broadening the upcoming special session of the legislature this fall to include discussing abortion legislation.

“We’re closely watching what’s happening in Texas in regards to their new pro-life law, including any legal challenges. Indiana is one of the most pro-life states in the country, and we’ll continue to examine ways to further protect life at all stages,” Indiana House Speaker Todd Huston said, according to a statement cited by the Associated Press.

MORE: How unprecedented the Texas abortion law is in scope of history

If Indiana indeed begins debating similar legislation when the legislature meets in 2022, it will align with what reproduction rights advocates have said could be an upcoming flashpoint.

“Many state legislatures have adjourned and will resume meeting in 2022. This is when we anticipate we will see the majority of copycat legislation introduced,” Elisabeth Smith, Director of State Policy and Advocacy at the Center for Reproductive Rights, told ABC News by email Wednesday afternoon.

Oklahoma’s Republican Gov. Kevin Sitt signed various bills into law in April that would significantly limit abortions in the state, including by deeming performing most abortions to be “unprofessional conduct” that could get a physician’s license suspended, and a “heartbeat ban” similar to Texas’ new law that prohibits abortions if the fetus’ heartbeat can be detected, which can happen even only six weeks into pregnancy.

But on Thursday, in the wake of the Texas law, a group of reproduction rights groups and abortion providers, among others, sued to block the laws before they would take effect on Nov. 1. Before the Texas law, every other “heartbeat” ban was blocked by courts as unconstitutional following Supreme Court precedent.

“If allowed to take effect, these laws would end abortion access in Oklahoma, forcing patients to travel great distances and cross state lines to get essential health care,” Center for Reproductive Rights president Nancy Northrop said in a press release from the organization. “It’s unbelievable that in the midst of a global pandemic, Oklahoma’s lawmakers would have people drive hundreds of miles to access abortion services.”