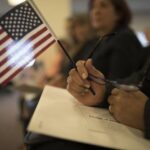 These immigrants have one shot to come to the US. But Biden has to act.

Three years ago, amid negotiations over immigration reform, then-President Donald Trump infamously questioned why the US was taking in immigrants from “shithole countries.”

He was referring to people from African nations who often have no legal pathway to come to the US except through a program known as the “diversity visa lottery.” Every year, roughly 55,000 people from countries with low levels of immigration to the US are chosen via a lottery to apply for a visa through the program. For many of them, it’s a golden ticket to a better life.

It wasn’t the first time the program had been targeted and misrepresented by Trump. He blamed a 2017 terrorist attack in New York on the program, vowing to end it. And he presented it as antithetical to his proposal for a “merit-based” immigration system, under which the US would select visa applicants based on desirable labor market attributes — defined so as to make the immigrant population whiter and richer.

Trump never actually managed to end the program, but his administration deprioritized the applicants relative to other immigrants. President Joe Biden’s election was supposed to bring diversity visa applicants relief. He had promised on the campaign trail that he would keep the program intact, and soon after his inauguration, he pledged to expand the program by 25,000 visas annually as part of his proposed comprehensive immigration reform package.

But well into the first year of his presidency, that hasn’t come to fruition. Rather, diversity visa lottery winners who applied for visas amid the Covid-19 pandemic now risk losing their opportunity to come to the US — in part because the State Department has continued the Trump-era policy of deprioritizing their applications.

“What the Biden administration has done to the diversity visa program in deprioritizing, it contravenes those campaign promises, and we’re worse off because of it,” said Rafael Urena, an American attorney representing diversity visa applicants affected by the policy. “We really draw from the strength of our diverse population.”

In response to a request for comment, a State Department official emailed me a statement on the condition of anonymity saying that the US government’s capacity to review these applications and schedule the required interviews depends on US embassies and consulates abroad, many of which are backlogged due to closures and capacity limits amid the pandemic.

They have been prioritizing services to US citizens overseas and issuing visas in urgent or emergency situations, such as for people seeking to aid America’s response to the pandemic. Immediate family members of US citizens, international adoptions, and engaged couples are next on the priority list. Diversity visa applicants are at the very bottom.

“Because of the unpredictable nature of the pandemic, it is impossible to forecast how many [diversity visas] we will issue this year, but we want to set appropriate expectations and say that it is very likely we will not issue the full allotment allowed,” the official said.

“The COVID-19 pandemic resulted in profound reductions in the Department’s visa processing capacity,” the official added. “Additionally, a range of presidential proclamations restricting travel in response to the pandemic have resulted in further constraints on visa issuances worldwide.”

That means diversity visa applicants could miss a once-in-a-lifetime chance to come to the US. The government has to process their applications by a September 30 deadline; otherwise, they lose their spot. And they likely won’t win the lottery again — they have a less than 1 percent chance of being selected from among more than 23 million entrants.

“It’s once in a lifetime,” said Maxwell Goodluck, a diversity visa lottery winner from Ghana who applied every year for 12 years before he was eventually selected. “If we lose this opportunity, it would take the grace of God for it to come back again,” he told me, referring to himself and the other applicants in the same position. “We don’t know what to do.”

Several lawsuits brought by roughly 25,000 diversity visa lottery winners from 141 countries altogether have argued that the federal government faces a legal obligation to review the applications of people who won the lottery and that the US’s vast resources can make that happen. But if that’s not possible, they say they should still have the opportunity to be issued a visa beyond the September 30 deadline.

For Lizbeth Rosales, a diversity visa lottery winner from Lima, Peru, that’s just what seems right. “We don’t have anything against the country or the citizens of America. We just want whatever is fair. That’s it,” she said. “We are not just case numbers. We are people. We have feelings, we have hopes, dreams. This is our only chance for a better future.”

The uncertainty as to whether diversity visa lottery winners will eventually be able to come to the US has left many putting their plans on hold and living with constant anxiety.

Rosales, who also applied for diversity visas on behalf of her husband and their two young children, was planning to move to New Orleans, where she previously spent a year working in the hospitality industry as an intern on a student visa.

She has friends there who encouraged her to apply for the visa lottery in the first place, and her husband, who works as a cook on a cruise ship, would also be able to find work. They were also hoping to pursue better educational opportunities for themselves and for their 4-year-old son and almost 1-year-old daughter.

Given that the pandemic has hit Peru particularly hard, leading to one of the highest per capita death rates in the world and a deep economic recession, Rosales said that moving to the US at this particular moment seems especially attractive. But the uncertainty has been tough to live with. She has commiserated with other diversity visa lottery winners in the region on WhatsApp groups.

“For some of them, this is their only way out. This really breaks my heart because I consider myself to be in a better position than others. It may be God making me experience all of this to better understand or value my life,” she said. “I feel affected not only for me but for the rest. You feel touched by other people’s suffering. So this definitely creates sadness and anxiety as well. I wish the reality was different.”

Goodluck, the lottery winner from Ghana, says he and others are experiencing this anxiety. “We hardly sleep these days,” he told me. “Sometimes, you can’t even concentrate. You’re thinking about it 24/7. To console ourselves, we end up crying.”

He has a bachelor’s degree in computer science and is working in the IT department for Ghana’s education department, but he says he has always wanted to pursue cybersecurity, which would require further education. He has a cousin in Colorado who has promised to support him in that goal if he moves to the US.

His backup plan is to pursue a master’s degree in computer science in Ghana. In order to study cybersecurity, he would have to take an online course. But the fees are high, and he doesn’t want to start the program without knowing whether he will stay in the country.

House Democrats have been trying to remedy the plight of diversity visa lottery winners from 2020 and 2021, but it’s not clear they will succeed.

Rep. Grace Meng (D-NY) has put forth an amendment to a Homeland Security appropriations bill that would allow unused diversity visas from 2020 and 2021 to remain available after the fiscal year ends on September 30. That means that a portion of the 55,000 or so diversity visas allocated for next year would go to people who had applied in previous years.

Though the amendment has passed in the relevant House committee, the entire bill still has to survive a full floor vote in the House. And it has yet to be considered by the Senate, where it is likely to face opposition from GOP members.

In May, Rep. Ritchie Torres (D-NY) also introduced legislation that would aid the almost 21,000 people who were either granted diversity visas or had applied for them but were prevented from entering the country under Trump-era bans. However, it hasn’t gained any traction in the months since.

Urena said the cost of waiting can be high. He had one client who had won the diversity visa lottery in 2020 but died while he was waiting for his visa to be issued. His older children had been hoping to come to the US on diversity visas and start a new life, but that won’t be possible now because they are no longer eligible through their father.

It’s a frustrating reality for families that are just trying to find a legal pathway to come to the US. “We didn’t do anything against the law. We just follow what is supposed to be followed,” Rosales said. “If we really are treated with fairness, we can be a good asset to the country.”

Will you support Vox’s explanatory journalism?

Millions turn to Vox to understand what’s happening in the news. Our mission has never been more vital than it is in this moment: to empower through understanding. Financial contributions from our readers are a critical part of supporting our resource-intensive work and help us keep our journalism free for all. Please consider making a contribution to Vox today from as little as $3.

Previous : Contento’s Joyful Commitment to Inclusivity
Next : Medical debt was cut nearly in half in states that expanded Medicaid