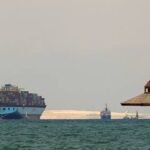 CAIRO (Sputnik) – A Russian delegation is set to visit the Suez Canal Economic Zone next Saturday to discuss further development of the Russian Industrial Zone (RIZ) there, a source in the Egyptian administration has told Sputnik.

The visit comes after the two sides reached a preliminary agreement on 29 July, about the expansion of the Russian Industrial Zone (RIZ), which in addition to the portion in Port Said will also include a site near the port of Ain Sokhna.

Zaki previously mentioned that work on the project is scheduled to start closer to the end of the year, once the agreement is finalised. It is assumed that the first stages of the project will be developed on a 247-acre area east of Port Said and 123.5 acres within Ain Sokhna.

In March 2018, the Egyptian government approved the creation of a Russian Industrial Zone to allow Moscow to localise products manufactured for Egyptian, African, and Middle Eastern markets. Russian developers are allowed to lease the area for 50 years.

Previous : Bitcoin Price Surpasses $50,000 For First Time Since May 15
Next : PayPal to Allow UK Customers to Buy, Hold, & Sell Cryptocurrency