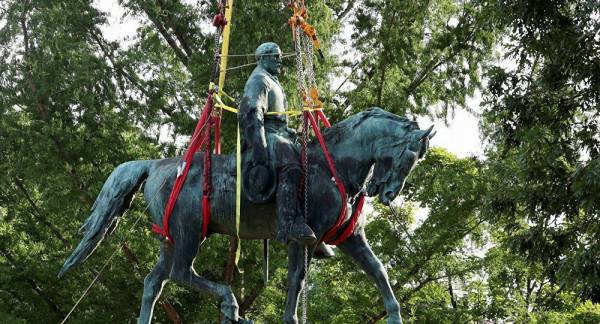 In December 2020, Virginia removed a statue of Robert E. Lee from the US Capitol building in Washington. The statue had stood for the last 111 years inside the Crypt of the US Capitol among 13 sculptures that commemorate the 13 original colonies of the United States.

On 2 September, the Virginia Supreme Court ruled that the state can remove a statue of Confederate General Robert E. Lee from Monument Avenue in Richmond, Virginia. The high court’s ruling came after two lawsuits filed by people who attempted to prevent the statue from being taken down.

In July, a monument to Lee was taken down in the city of Charlottesville, Virginia.

During the US Civil War, Lee led the forces of the Confederacy – a group of southern states that believed the institution of slavery should be protected. Calls for the removal of monuments honouring Confederate figures have grown amid a nationwide anti-racism movement ignited by the 25 May death of African American man George Floyd in police custody in Minneapolis.

Richmond, once the capital of the Confederacy, has removed several other pieces of Confederate statuary on city land since Floyd’s death, prompting the removal of Confederate monuments across the US.