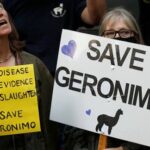 Llama-geddon is Upon Us: Geronimo the Alpaca Confirmed Dead by Defra 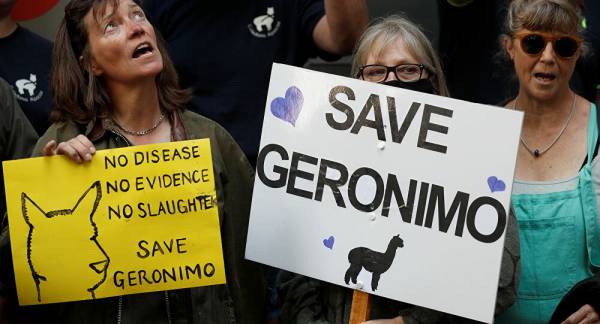 The top story of Britain’s summer “silly season” reached its tragic final chapter as Geronimo the consumptive alpaca was finally corralled by police on a Gloucestershire farm and put to sleep by government vets.

Geronimo the alpaca has been put down, ending months of protests and legal battles over his fate.

The Department for Environment, Food and Rural Affairs (Defra) confirmed in a statement on Tuesday afternoon that the consumptive camelid had been euthanised in line with a court warrant.

The eight-year-old New Zealand-born alpaca, who was kept by his owner Helen McDonald on her south Gloucestershire farm, had twice tested positive for tuberculosis (TB). McDonald and her supporters claimed both tests had shown false positives, and forced a judicial review into the decision to cull Geronimo.

“This is a terribly sad situation and our sympathies remain with all those affected by this devastating disease”, said Defra Chief Veterinary Officer Christine Middlemiss.

The official said culling TB-infected livestock was vital not just to protecting the rural economy, but “also necessary to avoid more TB cases in humans”.

Officers from Avon and Somerset Police had to be brought in to seize Geronimo from the farm in the Wickwar area as activists prepared to act as “human shields” to protect him.

Geronimo’s supporters took to Twitter to vent their rage. Animal welfare campaigner Dominic Dyer claimed Defra killed Geronimo “in the back of a van”, writing: “I am ashamed of this nation today”.

Dr Iain McGill, who along with Dyer helped former Royal Marine Pen Farthing evacuate over 150 cats and dogs from the Afghan capital Kabul while people were left behind, called it a “PR apocalypse”.

​Suspended Labour Party MP for the urban Leicester East seat Claudia Webbe tried to jump on the bandwagon too, reviving the nine-year-old issue of culling wild badgers to prevent the spread of bovine TB to cattle.