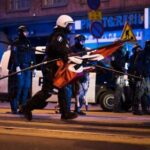 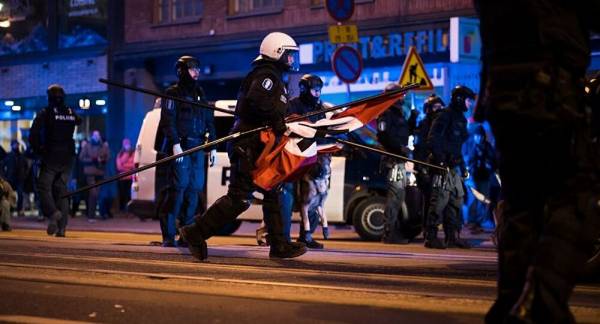 While acknowledging that the swastika is specifically associated with the ideologies and deeds of Nazi Germany, the court also ruled that its mere display doesn’t amount to incitement against an ethnic group, which instead would involve threatening, slandering, or insulting a group of people on the basis of, say, race or religion.

The Helsinki District Court has somewhat unexpectedly dismissed criminal charges against five men suspected of incitement against an ethnic group who waved swastika flags during an Independence Day demonstration.

The five defendants took part in the neo-Nazi “Toward freedom” demonstration in Helsinki on 6 December 2018.

In its decision the court acknowledged that the swastika flags were specifically associated with the ideologies and deeds of Nazi Germany, which, among other atrocities, persecuted and killed of millions of Jews.

At the same time, however, the court also said that the mere act of displaying a swastika flag didn’t amount to incitement against an ethnic group, noting such a crime would involve threatening, slandering, or insulting a group of people on the basis of, for instance, race or religion, the newspaper Hufvudstadsbladet reported.

Incidentally, the court also dismissed charges of interfering with the authorities. According to the prosecutor, four of the defendants tried to prevent police from confiscating the flags. The court ruled that the police had no legal grounds to interfere with the demonstrators’ freedom of assembly.

Unlike many European nations, displaying a flag with a swastika is not against the law in Finland, despite the atrocities associated with this symbol. Yet, state prosecutor Raija Toiviainen admitted it was a well-known symbol of Adolf Hitler’s Nazi Germany.

“I thought this would have been a clearer thing, but I see now that this requires reflection. In my opinion, the charges were justified, I have to take some time to examine the court’s decision”, she said.

Criminal law professor Kimmo Nuotio of the University of Helsinki admitted that he was surprised by the district court’s ruling, adding that he thinks it would be beneficial for the case to be examined by a higher court to judge the thin line between free speech and hate speech. At the same time, Nuotio conceded the possibility of Finland discussing a ban on the display of swastikas.

Finland has a long and complicated relationship with the swastika, which predates the rise of Nazi Germany. Starting in the late 19th century, the swastika emerged as a symbol of rising Finnish nationalism, as opposed to the largely Swedish nobility, and was frequently utilised by the Fennoman movement. The swastika was present in the newborn nation’s first decorations, flags, and emblems, as well as house design. While the swastika started to fall into oblivion following WWII as tarnished by the Nazis, it remains in use in historic contexts. The Finnish Air Force used a form of the controversial symbol until recently, quietly axing it by 2020.

Previous : Donations pour in after Marine from Wyoming killed in Kabul
Next : Taliban Offered US Military to Secure Kabul, But Americans Said No, Bombshell Report Reveals