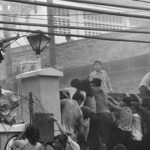 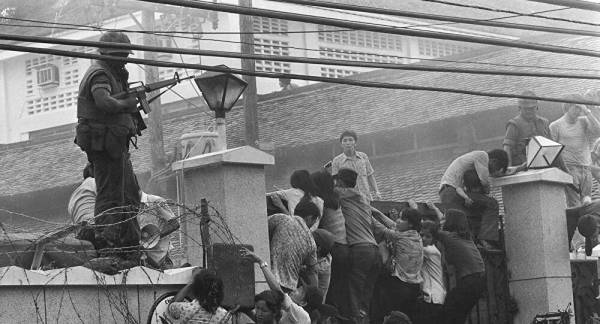 The scenes at Kabul airport are reminiscent of the chaos in Saigon in 1975 when pro-American Vietnamese desperately tried to flee before the arrival of communist forces. So how does the US’s campaign in Afghanistan compare with the Vietnam war?

US Secretary of State Antony Blinken told a US broadcaster at the weekend: “This is not Saigon.”

The echoes of the fall of Saigon in May 1975 and the collapse of the pro-US government of Ashraf Ghani in Kabul in August 2021 are obvious.

US troops fired shots into the air on Sunday, 15 August, as thousands of Afghans crowded onto the asphalt at Kabul aiport in the desperate hope of getting on board an airliner which could take them out of Afghanistan and away from the approaching Taliban*.

​Footage posted on social media showed Afghans trying to climb up to overcrowded planes as they waited clearance for take-off.

In the end all commercial flights were cancelled.

©
Photo : Twitter / @JawadSukhanyarScreenshot from a video allegedly showing a crowd of people rushing to the Kabul international airport as gunshots are heard

US troops prioritised evacuating embassy employees and thousands of Afghans who were employed by Washington.

The scenes were almost identical to Operation Frequent Wind, the evacuation from Saigon on 29-30 April 1975 of thousands of pro-US officials and their families as  communist forces closed in on the capital of the Washington-backed Republic of Vietnam.

Around 50,000 were airlifted out from the Tan Son Nhut air base and then, in the final hours before the North Vietnamese Army took Saigon, another 7,000 US embassy employees and their dependents were flown out on US helicopters as they queued on the roof of the embassy.

President Richard Nixon – who had ordered the last US combat troops out of Vietnam in 1972 – had resigned due to the Watergate scandal by the time of the fall of Saigon and it was left to President Gerald Ford to oversee the evacuation.

The fall of Saigon was captured by TV cameras and was one of the most humiliating moments for a US government.

​The end of the Vietnam war was as bad for Ford’s image as the end of the Afghanistan war is for Joe Biden – who has been called on to resign by Donald Trump – and Ford lost the 1976 presidential election to Jimmy Carter.

But how do the Vietnam and Afghanistan campaigns compare?

The US military archives record 58,220 fatalities during the Vietnam War, with the earliest death being in June 1956, when the President of South Vietnam, Ngo Dinh Diem, began using US military advisers to combat a communist insurgency backed by Hanoi.

The bodies of 91 American soldiers have never been recovered but they are presumed dead.

Up to 430,000 Vietnamese civilians are believed to have been killed during the war, as well as around 313,000 South Vietnamese troops and around a million who lost their lives fighting for the North Vietnamese Army or the Viet Cong.

The Vietnam War cost Washington around US$168 billion – that’s US$1 trillion in 2021 dollars.

The campaign in Afghanistan is estimated to have cost around US$2 trillion since 2001.

The US suffered far fewer casualties in Afghanistan – officially 2,312, although some quote the figure of 2,448 – between 7 October 2001 and this week.

The war has also cost the lives of 66,000 Afghan soldiers and police, more than 50,000 Taliban fighters, approximately 47,000 Afghan civilians and 1,144 service personnel from other NATO allies.

President George W. Bush launched Operation Enduring Freedom in the wake of 9/11, ordering troops into Afghanistan to destroy the Taliban and flush out their al-Qaeda* allies.

At the end of 2014, confident the Taliban had been defeated, the then President Barack Obama replaced it with Operation Freedom’s Sentinel and changed the emphasis to encouraging Afghan forces to take over security while the US and its allies gradually withdrew.

One of the crucial differences is the willingness to fight of the pro-US forces in the two countries.

After the signing of the Paris Peace Accords the last US combat troops were withdrawn from Vietnam in January 1973.

The ARVN – the Army of the Republic of Vietnam – fought alone for more than two years and in the final days of the war a handful of South Vietnamese helicopter pilots flew out to a US aircraft carrier, hoping to be refuelled so they could go back and carry on the fight.

Biden withdrew the last US combat troops on 2 July 2021.

Six weeks later Kabul has fallen, with the Taliban reportedly receiving little or no resistance in the final 48 hours.

Previous : Afghan Military Plane Downed by Uzbek Air Defences for Trying to Cross Border
Next : US Opens Probe Into Tesla Autopilot After 11 Crashes Involving the System