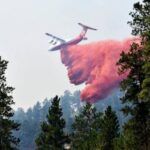 Fires charring range set up ranchers for hardship in US West 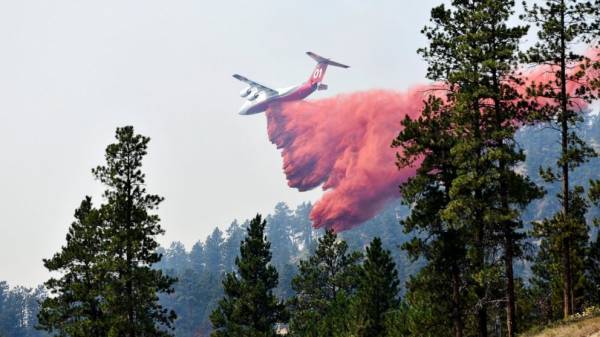 LAME DEER, Mont. — Wildfires tearing through Montana and elsewhere in the U.S. West are devouring vast rangeland areas that cattle ranchers depend upon, setting the stage for a potential shortage of pasture as the hot, dry summer grinds on.

On the Northern Cheyenne Indian Reservation, firefighters and local authorities scrambled to save hundreds of homes in the path of a fire that started Sunday and exploded across more than 260 square miles (673 square kilometers) in just a few days, triggering evacuation orders for thousands of people.

Some ranchers stayed behind to help fight it. Yet as flames charred mile after mile of rangeland and forest, they could do little to protect cattle pastures that are crucial to economic survival for families on the remote reservation.

As the fire raged across rugged hills and narrow ravines, tribal member Darlene Small helped her grandson move about 100 head of cattle to a new pasture, only to relocate them twice more as the flames from the Richard Spring fire bore down, she said Thursday. An extreme drought that’s blanketing the West has made matters worse by stunting vegetation untouched by fire.

“They’ve got to have pasture where there’s water. If there’s no water, there’s no good pasture,” Small said. Particularly hard hit were some ranchers already depending on surplus grass after a fire burned them off their normal pasture last year, she said.

Meanwhile, California’s Dixie Fire — which started July 13 and is the largest wildfire burning in the nation — threatened a dozen small communities in the northern Sierra Nevada even though its southern end was mostly corralled by fire lines.

The fire has burned 790 square miles (2,000 square kilometers), destroyed about 550 homes and nearly obliterated the town of Greenville last week. It was 30% contained.

The Montana blaze was primed over the last several days by swirling winds and hot temperatures. It has spread in multiple directions, torching trees and sending off embers that propelled the flames across the dry landscape.

The fire crept within about a mile (3.2 kilometers) of the eastern edge of the evacuated town of Lame Deer Wednesday night, Northern Cheyenne Tribe spokesperson Angel Becker said. It passed over a highway where officials had hoped to stop it, putting the southern portion of the reservation at increased risk, officials said.

As it closed in on the east side of town and a second fire ignited to the west, tribal officials late Wednesday urged residents who did not heed an earlier evacuation order to flee. Buses moved people to a school about 15 miles (24 kilometers) away and to a shelter set up on the nearby Crow Indian Reservation.

Lame Deer, a town of about 2,000 people, is home to the tribal headquarters and several subdivisions.

“We had some people who refused, but the majority of our elders and women and children definitely left with that last push,” Becker said.

With 40-foot (12-meter) flames visible from parts of Lame Deer, firefighters worked into early Thursday morning to keep the fire from destroying houses. None were reported lost, but officials continued assessing the damage. More than a dozen sheds and other outbuildings were lost, they said.

As smoke choked the air, rancher Jimmy Peppers sat on his horse east of town, watching an orange glow intensify over the site of his house as the night wore on.

“I didn’t think it would cross the highway, so I didn’t even move my farm equipment,” said Peppers, who spent the afternoon herding his cattle onto a neighbor’s pasture closer to town.

Also ordered to leave were about 600 people in and around Ashland, a small town just outside the reservation. It remained under an evacuation order, but officials said the danger appeared to have eased for now.

Around the perimeter of Lame Deer, crews were building fire breaks and conducting intentional burns — or “burnouts” — in hopes of lessening the amount of fuel available on the ground, fire spokesperson Jeni Garcin said. Officials were cognizant of the need to protect pastureland, she said.

“We fully recognize the value of grass around here,” Garcin said. “There’s enough lost in this fire that we will be very strategic about how we do any of these burnouts.”

Extreme drought conditions have left trees, grass and brush bone-dry throughout many Western states, making them ripe for ignition.

At the same time, California and some other states face flows of monsoonal moisture that were too high to bring real rain but could create thunderstorms that bring the risk of dry lightning and erratic winds.

In Northern California, a number of wildfires and the threat of more prompted three national forests to close down the Trinity Alps Wilderness Area, a 780-square mile (2,000-square kilometer) area of granite peaks, lakes and trails, into November.

Climate change has made the region warmer and drier in the past 30 years and will continue to make the weather more extreme and wildfires more destructive, according to scientists. The more than 100 large wildfires in the American West come as parts of Europe are also burning.

New research indicates wildfire smoke may be part of a vicious cycle making clouds rain less, which makes it hotter and plants drier and easier to catch fire.

Scientists flew a research plane into smoky skies six times in the U.S. West in 2018 and found five times the water droplets, but they were half the size, according to a study in Wednesday’s Geophysical Research Letters. The smaller droplets aren’t big enough to fall as rain, said study lead author Cynthia Twohy, a cloud physicist at NorthWest Research Associates.

This is not the main cause for the lack of rain, but “it could be a factor,” Twohy said. “The clouds are being affected. We saw that pretty clearly.”

The main cause of the drought — a huge factor in worsening wildfires — is natural weather changes with some possible climate change, said Park Williams a hydrology and fire scientist at the University of California, Los Angeles, who wasn’t part of the research.