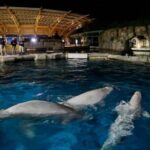 Second beluga in failing health after move to Connecticut 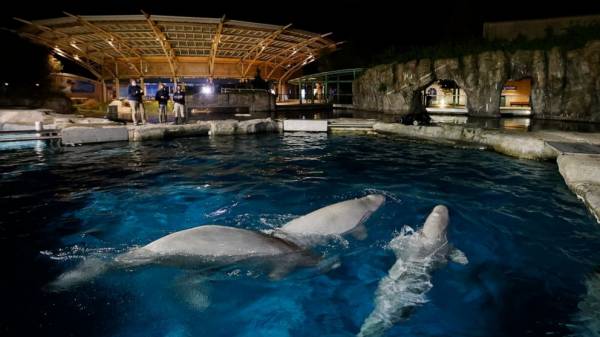 Mystic Aquarium says that a second of the five beluga whales it imported in May from a marine park in Canada is in failing health.

Tuesday night’s revelation comes three weeks after a male beluga, who was also part of the group that arrived from Marineland in Niagara Falls, died at Mystic, an aquarium that specializes in beluga research.

This female whale is suffering from several health issues including a low white blood cell count and gastrointestinal issues, the aquarium said in a Facebook post.

“The veterinarian team is monitoring the (female) beluga around the clock and is exploring every treatment option available to help her recover,” Mystic said in its social media post. “Mystic Aquarium has additionally reached out to beluga experts from across the country who are making the journey to the facility to assist with the situation.”

The whales were imported from Marineland in Niagara Falls, Ontario, after a lengthy battle to obtain permits from both the United States and Canada.

The male whale, which died on Aug. 6, had arrived with a preexisting gastrointestinal condition, the aquarium said at the time.

Connecticut-based Friends of Animals and other activists had sought to block the transport of the whales in a lawsuit last fall against the U.S. Commerce secretary and National Marine Fisheries Service, which had approved the research permit.

The group claimed the U.S. permit violated the Marine Mammal Protection Act and the National Environmental Policy Act because government officials did not adequately address the potential harm to the belugas from being moved to Mystic.

A federal judge in March declined to issue an injunction.

Naomi Rose, a marine mammal scientist with the Animal Welfare Institute, which was not part of the original lawsuit, said Mystic has had a very good reputation when it comes to beluga care and research, but said that is quickly deteriorating.

She is calling for an investigation of Mystic by the National Marine Fisheries Service, the U.S. Fish and Wildlife Service and the federal Animal Health and Plant Inspection Service. She said she wants the remaining whales to be examined by an independent marine veterinarian and will be asking for health certificates and other documentation from the move.

“When (the male whale) died, Mystic said the other four were in good health” she said. “Well, three weeks later, one of them is probably dying. And if its something that happened in the last three weeks, well what the hell is that? And if it’s something that she was already suffering from when she came from Marineland, than she wasn’t healthy three weeks ago, so they just outright lied.”

The whales, which range in age from 7 to 12, were born in captivity and left an overcrowded Canadian habitat with about 50 other whales, Mystic said. In Connecticut, plans are for them to be at the center of important research designed to benefit belugas in the wild, aquarium officials said.

“There is widespread agreement among all parties concerned about beluga whales, including many animal rights groups and Marineland, that some of the belugas need to be moved out of that facility,” the aquarium said Tuesday. “The belugas brought to Mystic were all born under human care, and therefore would not survive if released into the wild.”