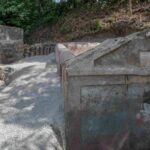 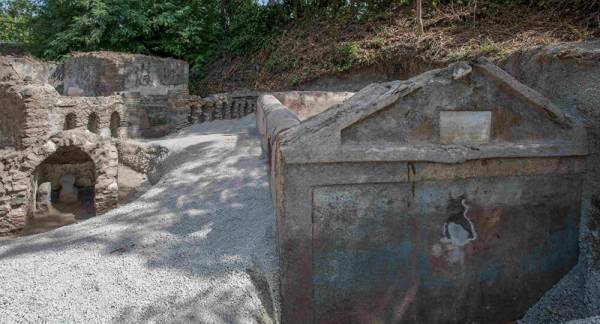 Mummified remains were discovered in a tomb at the necropolis at Porta Sarno, which was one of the ancient city’s main entrance gates. The tomb is thought to date from the decades before Pompeii was destroyed by Mount Vesuvius’ explosion in 79 AD.

Archeologists of the joint initiative of the European University of Valencia and the Archaeological Park of Pompeii working in the ancient Roman city have discovered the partially mummified remains of a former slave who advanced through the social ranks, reaching the position of imperial cult priest, the park announced.

This discovery is quite rare, according to archeologists, because adult individuals who died during the Roman era were customarily cremated. In the grave, there was also a glass urn with the name of a woman, Novia Amabilis, who could have been Secundio’s wife.

“Pompeii never ceases to amaze, and has confirmed her place in a story of redemption, as an international role model, and a place where research and new archaeological excavations are taking place once more, thanks to the many professionals in the field of cultural heritage, who with their work never cease to produce extraordinary results for the world which are a source of pride for Italy,” Italian Minister of Culture, Dario Franceschini is quoted in a statement upon the findings as saying.

According to the archeological park, Secundio was a slave who was the custodian of the Temple of Venus in Pompeii. He became a member of the Augustales, a college of priests in charge of emperor worship, after being released from slavery.

1 / 6
©
REUTERS / Parco Archeologico PompeiArchaeologists work at a burial site where a partially mumified skeleton was discovered in this undated photo obtained August, 17, 2021, in Pompeii, Italy.

Furthermore, an inscription on a marble slab found at the top of the tomb dedicated to Secundio mentions Greek-language theatre performances in Pompeii. Director of the Archeological Park Gabriel Zuchtriegel is also quoted as noting that such a finding is “the first clear evidence of performances at Pompeii in the Greek language, which had previously been hypothesised on the basis of indirect indicators.”

In recent years, dozens of fresh finds have been made at Regio V, a vast portion of the archaeological site that has yet to be fully opened to the public, including the remains of people and animals killed by the Mount Vesuvius eruption.