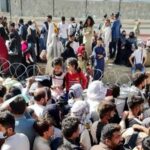 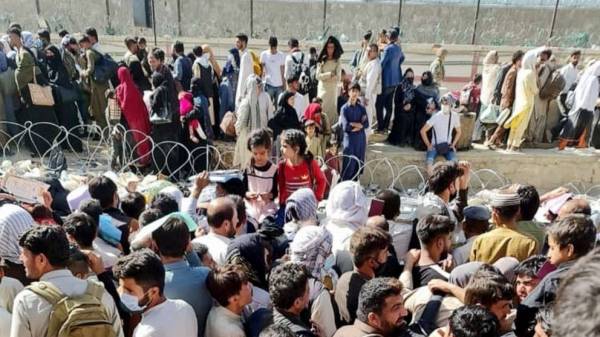 With the Taliban growing more violent and adding checkpoints near Kabul’s airport, an all-volunteer group of American veterans of the Afghan war launched a final daring mission on Wednesday night dubbed the “Pineapple Express” to shepherd hundreds of at-risk Afghan elite forces and their families to safety, members of the group told ABC News.

Moving after nightfall in near-pitch black darkness and extremely dangerous conditions, the group said it worked unofficially in tandem with the United States military and U.S. embassy to move people, sometimes one person at a time, or in pairs, but rarely more than a small bunch, inside the wire of the U.S. military-controlled side of Hamid Karzai International Airport.

The Pineapple Express’ mission was underway Thursday when the attack occurred in Kabul. Two suicide bombers believed to have been ISIS fighters killed at least 13 U.S. service members — 10 U.S. Marines, a Navy corpsman, an Army soldier and another service member — and wounded 15 other service members, according to U.S. officials.

MORE: US special operations forces race to save former Afghan comrades in jeopardy

There were wounded among the Pineapple Express travelers from the blast, and members of the group said they were assessing whether unaccounted-for Afghans they were helping had been killed.

As of Thursday morning, the group said it had brought as many as 500 Afghan special operators, assets and enablers and their families into the airport in Kabul overnight, handing them each over to the protective custody of the U.S. military.

That number added to more than 130 others over the past 10 days who had been smuggled into the airport encircled by Taliban fighters since the capital fell to the extremists on Aug. 16 by Task Force Pineapple, an ad hoc groups of current and former U.S. special operators, aid workers, intelligence officers and others with experience in Afghanistan who banded together to save as many Afghan allies as they could.

“Dozens of high-risk individuals, families with small children, orphans, and pregnant women, were secretly moved through the streets of Kabul throughout the night and up to just seconds before ISIS detonated a bomb into the huddled mass of Afghans seeking safety and freedom,” Army Lt. Col. Scott Mann, a retired Green Beret commander who led the private rescue effort, told ABC News.

After succeeding with helping dozens of Afghan commandos and interpreters get into the protective ring of the airport created by the 6,000 American troops President Joe Biden dispatched to the airfield after Kabul fell to the Taliban, the group initiated an ambitious ground operation this week aided by U.S. troops inside. The objective was to move individuals and families through the cover of darkness on the “Pineapple Express.” The week-long effort and Wednesday’s operation were observed by ABC News under the agreement of secrecy while the heart-pounding movements unfolded.

The operation carried out Wednesday night was an element of “Task Force Pineapple,” an informal group whose mission began as a frantic effort on Aug. 15 to get one former Afghan commando who had served with Mann into the Kabul airport as he was being hunted by the Taliban who were texting him death threats.

They knew he had worked with U.S. Special Forces and the elite SEAL Team Six for a dozen years, targeting Taliban leadership, and was, therefore, a high-value target for them, sources told ABC News.

Two months ago, this commando told ABC News he had narrowly escaped a tiny outpost in northern Afghanistan that was later overrun while awaiting his U.S. special immigrant visa to be approved.

The effort since he was saved in a harrowing effort, along with his family of six, reached a crescendo this week with dozens of covert movements coordinated virtually on Wednesday by more than 50 people in an encrypted chat room, which Mann described as a night full of dramatic scenes rivaling a “Jason Bourne” thriller unfolding every 10 minutes.

The small groups of Afghans repeatedly encountered Taliban foot soldiers who they said beat them but never checked identity papers that might have revealed them as operators who spent two decades killing Taliban leadership. All carried U.S. visas, pending visa applications or new applications prepared by members of Task Force Pineapple, they told ABC News.

MORE: What we know about the Kabul airport attack that killed US troops

“This Herculean effort couldn’t have been done without the unofficial heroes inside the airfield who defied their orders to not help beyond the airport perimeter, by wading into sewage canals and pulling in these targeted people who were flashing pineapples on their phones,” Mann said.

With the uniformed U.S. military unable to venture outside the airport’s perimeter to collect Americans and Afghans who’ve sought U.S. protection for their past joint service, they instead provided overwatch and awaited coordinated movements by an informal Pineapple Express ground team that included “conductors” led by former Green Beret Capt. Zac Lois, known as the underground railroad’s “engineer.”

The Afghan operators, assets, interpreters and their families were known as “passengers” and they were being guided remotely by “shepherds,” who are, in most cases their loyal former U.S. special operations forces and CIA comrades and commanders, according to chat room communications viewed by ABC News.

There was one engineer, a few conductors, as well as people who were performing intelligence-gathering duties. The intelligence was pooled in the encrypted chat group in real-time and included guiding people on maps to GPS pin drops at rally points for them to stage in the shadows and in hiding until summoned by a conductor wearing a green chem light, ABC News observed in the encrypted chat.

Once summoned, passengers would hold up their smartphones with a graphic of yellow pineapples on a pink field.

Before the deadly ISIS-K bombing on Thursday near the Abbey Gate of the airport known as HKIA, intelligence warnings were issued about possible improvised explosive device attacks by ISIS-K. Around 8 p.m. EST Wednesday, the shepherds reported in the chatroom, which was viewed by ABC News, one by one that their passenger groups maneuvering discreetly in the darkness toward rally points had suddenly gone dark and were unreachable on their cell phones.

MORE: Biden vows retribution on terrorists who killed 13 US service members in Kabul

“We have lost comms with several of our teams,” texted Jason Redman, a combat-wounded former Navy SEAL and author, who was shepherding Afghans he knew.

There was concern the Taliban had dropped the cell towers — but another Task Force Pineapple member, a Green Beret, reported that he learned the U.S. military had employed cell phone jammers to counter the IED threat at Abbey gate. Within an hour, most had reestablished communications with the “passengers” and the slow, deliberate movements of each group resumed under the ticking clock of sunrise in Kabul, ABC News observed in the encrypted chat.

“The whole night was a roller-coaster ride. People were so terrified in that chaotic environment. These people were so exhausted, I kept trying to put myself in their shoes,” Redman said.

Looking back at an effort that saved at least, by their count, 630 Afghan lives, Redman expressed deep frustration “that our own government didn’t do this. We did what we should do, as Americans.”

Many of the Afghans arrived near Abbey Gate and waded through a sewage-choked canal toward a U.S. soldier wearing red sunglasses to identify himself. They waved their phones with the pineapples and were scooped up and brought inside the wire to safety. Others were brought in by an Army Ranger wearing a modified American flag patch with the Ranger Regiment emblem, sources told ABC News.

Lois said the Task Force Pineapple was able to accomplish a truly historic event, by evacuating hundreds of personnel over the last week.

“That is an astounding number for an organization that was only assembled days before the start of operations and most of its members had never met each other in person,” Lois told ABC News.

Lois said he modeled his slow and steady system of maneuvering the Afghan families in the darkness after Harriet Tubman’s Underground Railroad for American slave escapees.

The Afghan passengers represented the span of the two-decade war there, and participants included Army Maj. Jim Gant, a retired Green Beret known as “Lawrence of Afghanistan,” who was the subject of a 2014 “Nightline” investigation.

“I have been involved in some of the most incredible missions and operations that a special forces guy could be a part of, and I have never been a part of anything more incredible than this,” Gant told ABC News. “The bravery and courage and commitment of my brothers and sisters in the Pineapple community was greater than the U.S. commitment on the battlefield.”

“I just want to get my people out,” he added.

Dan O’Shea, a retired SEAL commander, said he successfully helped his own group, which included a U.S. citizen who served as an operative and his Afghan father and brother in a nail-biting crucible as they walked on foot to one entry point after another for hours. They dodged Taliban checkpoints and patrols in order to get inside the U.S. side of the airport and on a plane out of Kabul.

“He was not willing to let his father and his brother behind; even it meant he would die. He refused to leave his family,” O’Shea, a former counterinsurgency adviser in Afghanistan, told ABC News. “Leaving a man behind is not in our SEAL ethos. Many Afghans have a stronger vision of our democratic values than many Americans do.”

It all began with trying to save one Afghan Commando, whose special immigrant visa was never finalized.

During an intense night last week involving coordination between Mann and another Green Beret, an intelligence officer, former aid workers and a staffer for Florida Republican and Green Beret officer Rep. Mike Waltz, the ad hoc team enlisted the aid of a sleepless U.S. Embassy officer inside the airport. He helped Marines at a gate to identify the former Afghan commando, who was caught in the throngs of civilians outside the airport and who said he saw two civilians knocked to the ground and killed.

“Two people died next to me — 1 foot away,” he told ABC News from outside the airport that night, as he tried for hours to reach an entry control point manned by U.S. Marines a short distance away.

With Taliban fighters mixing into the crowd of thousands and firing their AK-47s above the masses, the former elite commando was finally pulled into the U.S. security perimeter, where he shouted the password “Pineapple!” to American troops at the checkpoint. The password has since changed, the sources said.

Two days later, the group of his American friends and comrades also helped get his family inside the airport to join him with the aid of the same U.S. embassy officer.

Mann said the group of friends decided to keep going by saving his family and hundreds more of his elite forces comrades on the run from the Taliban.

“They never wavered. I and many of my friends are here today because of their bravery in battle. We owe them all effort to get them out and honor our word,” Mulroy said.

Previous : Bad goes to tragic for Biden on Afghanistan: The Note
Next : Latino city in Arizona grew, but census says it shrank