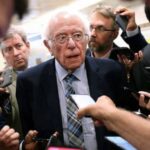 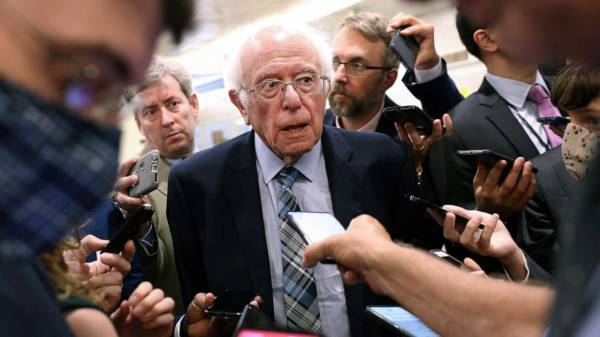 The legislative language comes just as the Senate is preparing to complete its work on a separate $1.1 trillion bipartisan infrastructure bill late Monday or early Tuesday morning. Taken together, the bills are designed to comprise the whole of Biden’s American Families Plan priorities.

Unlike the bipartisan infrastructure plan, which focuses on “core” infrastructure needs such as roads bridges and waterways, the budget resolution includes many of Biden’s social programs focusing on family, climate and health care.

Democrats are expected to try to force the massive package through the Senate this week without a single GOP vote. Budget bills are not subject to the regular 60-vote threshold generally necessary to move legislation forward.

Kevin Dietsch/Getty Images, FILESen. Bernie Sanders talks to reporters as he walks to a vote at the U.S. Capitol on July 21, 2021 in Washington, D.C. The Senate is expected to hold a cloture vote on the bipartisan infrastructure bill.

But any Senate action on the budget this week is just the first in a long series of steps before these objectives make it to Biden’s desk.

After the Senate votes on the budget bill, individual committees must craft legislation in line with the new budget, and that legislation will go before the full chamber for a second vote, likely in the fall.

House Speaker Nancy Pelosi has also been clear that she’ll need to see the Senate’s final budget product before she brings the House in to vote on the bipartisan infrastructure bill and the budget resolution. House progressives want assurances that the Senate can approve social programs in the budget bill before they lend their support to the slimmed-down bipartisan package.

Republicans have vowed to fight the budget resolution at every step, including through what is expected to be a marathon of votes this week on partisan amendments designed to score political points and make centrist Democrats squirm.

The Democrat-only bill is expected to be funded in part by raising taxes on big corporations and wealthy Americans, something Republicans see as a referendum on the 2017 tax cuts, which many of them view as on one of former President Donald Trump’s most significant legislative achievements.

As well as general opposition to the massive $3.5 trillion price tag, Republicans have also promised a bruising fight over language incorporated into the legislation aimed at implementing significant changes to immigration policy, including providing a pathway to citizenship for undocumented immigrants.

According to a top-line summary of the budget resolution released Monday, the package will “provide green cards to millions of immigrant workers and families” and “fund smart technology for safe and efficient borders for trade, travel and migration.”

Senate Judiciary Committee Chairman Dick Durbin, D-Ill., has told reporters that his panel, which will write this portion of the final bill, plans to draft legislation that would provide green cards for so-called “Dreamers” — children brought to the U.S. illegally – and for farmworkers.

It is not yet clear whether these immigration policies will be permissible under the strict rules governing what may be in a Senate budget bill, but barring a ruling by the chamber’s parliamentarian that such policies are out of bounds, there isn’t much that Republicans can do to stop passage of the bill if all Democrats are on board.

It will require all 50 Senate Democrats plus the tie-breaking vote of Vice President Kamala Harris to move the budget resolution forward, but it is not yet clear that the caucus will remain united.

Earlier this month, Sen. Kyrsten Sinema, D-Ariz., announced that she would not support a $3.5 trillion top-line package. She said she’ll allow the process to move forward this week by lending her support to the budget bill for now, but as committees slog through their work, she said she wants to see overall spending reduced.

It is also not clear if all Democrats will agree with the leadership’s budget strategy for keeping the overall price tag of the bill down. Committees are expected to sunset costly programs – like the childcare tax credit – before the bill’s 10-year budget window, even though the programs could be extended in later years, thus growing the ultimate spending on the plan.

Foreshadowing another major partisan fight to come, Democrats also left a hike of the federal debt limit out of their budget blueprint, perhaps to appease moderates in their ranks, many of whom are up for re-election in 2022 and fearful of growing deficit spending in Washington. Republican challengers are all but certain to use a vote to raise the debt limit against them.

A suspension of the federal debt limit expired at the end of July, and Treasury Secretary Janet Yellen has warned that the US could exhaust its borrowing authority in the coming months without swift congressional action.

J. Scott Applewhite/APSenate Minority Leader Mitch McConnell walks to the chamber after the Senate voted to advance the $1 trillion bipartisan infrastructure bill, at the U.S. Capitol in Washington, D.C., Aug. 7, 2021.

But Republican Leader Mitch McConnell has repeatedly insisted that Republicans will not vote to increase the debt limit, arguing that Democratic policies, like the massive COVID-19 relief bill and the upcoming budget bill, are driving up the debt, even though an increase in the nation’s debt ceiling is done to accommodate spending and tax cuts that have already occurred, including the effects of the 2017 GOP tax cut.

But the administration challenged that notion in a statement Monday from Yellen, who urged Congress to use “regular order,” rather than the budget bill, to raise the debt ceiling.

“The vast majority of the debt subject to the debt limit was accrued prior to the Administration taking office. This is a shared responsibility, and I urge Congress to come together on a bipartisan basis as it has in the past to protect the full faith and credit of the United States,” Yellen wrote.

Failure to act could prove catastrophic. The last time the parties engaged in a partisan fight over the debt ceiling in 2011 resulted in a historic downgrading of the U.S. credit rating for the first time. World and U.S. markets plunged.

The Senate is expected to leave town for a shortened August recess upon completion of its work on the budget. When they return the second week in September, they’ll have just weeks to forge a path forward on the debt limit, as well as pass a final version of the Democrat-budget bill, this as the government runs out of funding on Oct. 1.

Previous : Pentagon to require mandatory COVID vaccines by mid-September: Source
Next : Trump sees limits to his GOP sway as infrastructure advances: The Note