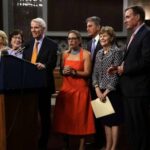 The long and winding road to an infrastructure bill: Reporter’s notebook 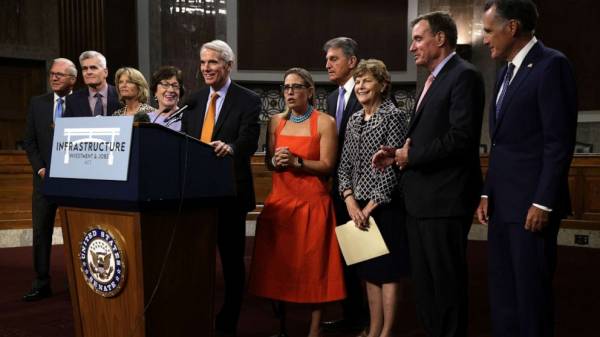 “Senator, what is a goat rodeo?”

When you start covering Congress, you don’t imagine yourself asking a United States senator these types of questions just outside the hallowed chamber walls at 11 p.m. But that is how Sen. John Kennedy, R-La., described Thursday’s late night Senate-wide paralysis when members tried, and ultimately failed, to agree on a path forward to expedite passage of a massive bipartisan infrastructure deal that is a key priority for President Joe Biden.

“It’s like a dumpster fire with animals,” Kennedy said, departing the floor upon learning his colleagues had not, despite hours of bickering, come to an agreement on a set of amendment votes that would have allowed the bipartisan infrastructure bill to pass that night.

Ah yes… a dumpster fire with animals. That’s how you love to hear the upper chamber described.

The evenly divided Senate is currently on track to take a key procedural vote on a $1.1 trillion bipartisan infrastructure deal that would fund things like roads, bridges and waterways, on Saturday. It’s been a lengthy journey, the conclusion of which is still unclear.

Depending on whose timeline you’re referencing, the Senate has now been working on infrastructure for at least four months. If Congress succeeds at getting this done, it will be a huge victory for the president and for the lawmakers who helped craft the bill.

On the way there, there have been many stages of negotiations and lots of closed-door meetings, which means there have been countless evenings spent sitting in the hallways with fellow Senate reporters eating Skittles and trying to outwit one another on Twitter while waiting for senators to emerge with even a morsel on the state-of-play.

First, we staked out a key group of Republicans who crafted a package, which the administration ultimately dismissed upon announcing that the GOP was not willing to consider a top-line value they found palatable.

And then there was (and I’m cringing as I type out this acronym) the BIF.

BIF = bipartisan infrastructure framework. Crafted in the basement hideaways of the Senate late into the night, over, at varying times, pizza, cannolis, wine, tacos, burritos (and many other food items I failed to track), the BIF formed the foundations of the bill the Senate is preparing to vote on.

A group of 10 bipartisan senators, led by Sen. Rob Portman, R-Ohio, and Kyrsten Sinema, D-Ariz, spent weeks crafting the BIF before, at long last, emerging from the White House in June and announcing that the BIF had transformed into the BID. That’s right: the bipartisan infrastructure DEAL.

Now you would think an announced deal would be a huge relief for Senate reporters. No more closed-door meetings to sit on the floor in the hallway outside of right? Wrong.

Turning a deal in principal into legislative language that can be voted on the floor takes time. With any bill it always does, and in this case, it took several weeks, which meant several more weeks of Skittles, Twitter, sitting on trash cans in the hallway, rinsing and repeating.

Further complicating this whole scenario is the fact that all of our time in the Senate hallways could prove useless if House progressives decide the bill doesn’t suit them. This is a distinct possibility, and one House Speaker Nancy Pelosi is trying to avoid by promising not to pass the bipartisan bill in the House until the Senate sends her a second, larger, budget resolution that includes Biden’s “human infrastructure” priorities.

The Senate is expected to get cracking on that budget bill in the coming days, but first, they’ve got to kick this one over the finish line. And on Thursday, procedural hijinks led to delay.

Failure to find unanimous agreement on amendments meant 13 hours of paralysis on the floor. But reporters had to hang nearby, unsure of whether senators might finally strike an agreement on how to proceed and pass the bill in the early morning hours.

Majority Whip John Thune told me at about 9 p.m. that he was “not feeling it.” But after covering this bill for months, I couldn’t bare to take a chance and miss final passage.

So I sat in the Senate with my colleagues from other TV and print outlets and we waited until we knew for sure whether the vote would occur.

In the meantime, we ate cold leftover chicken tenders and sat in the chamber trying to list every senator from memory on a scratch sheet of paper; we tweeted out gifs that only six other people intimately familiar with this procedural nightmare would find funny; and we ordered Chipotle and ate it on the steps of the Capitol while asking senators walking in and out when they thought we might see a final vote.

Most of them didn’t know.

ABC NewsAlaska Republican Lisa Murkowski calls the sunset over the Capitol “snap worthy” and stops to take a photo while waiting for the Senate to proceed on the bipartisan infrastructure bill.

And they, like us, can appreciate that passing historic legislation is always a more time-consuming process than we thought it would be. And they, like us, seem willing to wait the few extra days necessary to get it done.