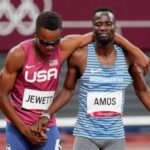 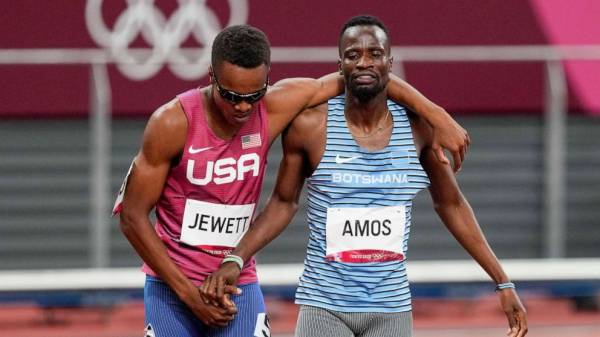 Ahead of the Tokyo Olympics closing ceremony, President Joe Biden and first lady Jill Biden were full of praise for Team USA during a Zoom call with dozens of Olympians who competed in the past two weeks, with the president telling the athletes they “really represented America.”

“You represented every single thing that we stand for,” Biden said. “It wasn’t just your athletic ability, it was your moral courage. The courage you show. The courage those who are under real pressure … and phycological pressure.”

Biden singled out swimmer Katie Ledecky and runner Isaiah Jewett for their displays of sportsmanship during their competitions and thanked Simone Biles for deciding to return for her final event after taking care of her mental health.

“These are the things that people look at around the world more than anything that I do as your president or other people do in public life,” he said to all the athletes. “They get the impression of who we are as Americans — who we are. And your handling yourself with such grace and such, such decency, it just — you made me so damn proud.”

MORE: Key moments from Day 15 of the Olympic Games

The president said that they made American hearts “swell” and “restored the soul of America in so many ways.” Biden also invited them to the White House in the fall, “so the nation can see you and I can brag more on you.”

He added that “there’s about 10 events that I’d love to talk about, but I’ll wait until you get to the White House.”

Jill Biden thanked the athletes for the “warm welcome” she received when she attended for the opening ceremony and watched several of the competitions during her time in Tokyo.

“We just could not feel more proud of all of you, and everything you did in representing our country and all Americans feel the exact same way,” she said.

Matthias Schrader/APKara Winger, of United States, competes in qualifications for the women’s javelin throw at the 2020 Summer Olympics, Tuesday, Aug. 3, 2021, in Tokyo.

Javelin thrower Kara Winger, who was chosen as Team USA’s flag bearer for the closing ceremony, said she was “incredibly honored” to have this “closure moment” since it will be her final Olympic Games.

“They picked you because of your character, kid,” the president told Winger.

MORE: This dad adopted his son from Cambodia at 18 months old and is now watching him compete in Tokyo Olympics

One of the athletes Biden first referenced, Jewett, also discussed the viral moment from his 800-meter semifinal race when he tripped and caused Botswana’s Nijel Amos to fall, and the athletes helped each other up and jogged across the finish line together.

Biden told him that that moment had a “profound impact around the world” and thanked him for that display of sportsmanship.

“America, when it leads the world, leads not by the example of our power, but by the power of our example,” Biden told Jewett. “That’s the God’s truth. And you are an epitome of that. And we thank you for that.”

Jae C. Hong/APIsaiah Jewett, of the United States, and Nijel Amos, right, of Botswana, shake hands after falling in the men’s 800-meter semifinal at the 2020 Summer Olympics, Sunday, Aug. 1, 2021, in Tokyo.

One of the biggest names to compete in the 2020 Games, Simone Biles, was given a few minutes to speak about her decision to remove herself from most of her events to focus on her mental health, saying it “will probably be one of my greatest accomplishments.”

“If you would have asked me in my younger years, I would have probably been too stubborn, but at that point I knew that I just had to take a step back, let the other girls go up and do their job, and I’m very proud of the way they handled everything, especially last minute with me having to step back,” she said.

She said mental health being discussed more in sports is a positive because they are “humans before athletes.”

The president praised Biles for the choice she made, calling her “one of the greatest athletes in the world.”

How climbing works in competition at the Olympics

Biden said he always considered himself to be a “very good athlete,” having competed in baseball and football when he was younger, but admitted that the beam “is the thing that frightens me the most.”

“Doing a flip on a 4-inch beam is my idea of going to purgatory,” he said jokingly. “I’d try most anything else before I try that.”

Among the other Olympians on the call were swimmer Lydia Jacoby, the 17-year-old from Alaska who won gold in the 100-meter breaststroke; gymnast Jade Carey, who won gold in the floor exercise; swimmer Zach Apple, who won golds in the 4-x-100 freestyle relay and 4-x-100 medley relay; and gymnast Jordan Chiles, who won silver in the team all-around.

The U.S. is set to lead the overall medal count for the seventh straight Olympics.