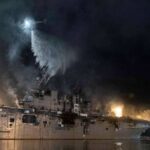 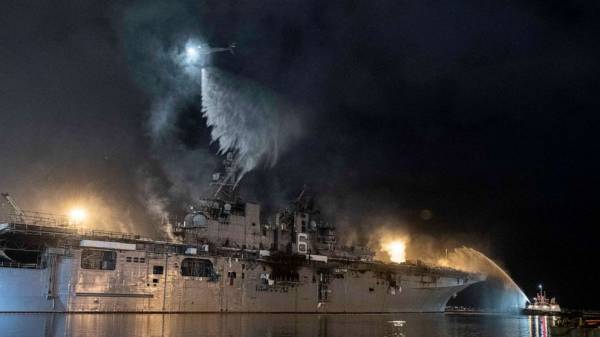 The attorney for the sailor charged with setting last year’s fire aboard the USS Bonhomme Richard maintains that his client did not play a role in setting the fire and denied that he was embittered against the Navy after dropping out of SEAL training, as suggested in a federal search warrant unsealed earlier this week.

When the Navy announced the charges last week it declined to disclose the sailor’s name, but earlier this week federal prosecutors requested the unsealing of a federal search warrant, requested last year, to assist in the sailor’s legal defense.

That search warrant requested access to the online files of 20-year-old Seaman Apprentice Ryan Sawyer Mays who was a sailor assigned to the ship while it was docked in San Diego for long-term maintenance.

The Navy and Mays’ attorney confirmed Wednesday to ABC News that he was the sailor charged with setting the fire, which ultimately led to the decommissioning of the amphibious ship.

The search warrant also disclosed new details about the investigation into the fire that resulted in Mays being charged.

A sailor working in the area where the fire started in the ship’s lower decks recalled seeing a masked sailor he believed to be Mays carrying two buckets into the storage area just minutes before the first reports of smoke.

According to Naval criminal investigators that same sailor mentioned “a sailor named MAYS that ‘hates’ the U.S. Navy and the Fleet.”

According to the search warrant, Mays had been assigned to the Bonhomme Richard in 2019, after having dropped out five days into the intensive training program to become a Navy SEAL.

Mays’ attorney, Gary Barthel, told ABC News that his client was not embittered against the Navy after he quit Basic Underwater Demolition/SEAL (BUDS) training.

“Absolutely not,” Barthel said Wednesday afternoon. “His dream has always been to make the Navy a career.”

Barthel said that while “more than anything” Mays wanted to become a SEAL, the training is very difficult and many people drop out. He emphasized that his client was not angry with the Navy as a result of dropping out of the program.

“My client, although he dropped out, was hopeful that one day he could get back into it,” Barthel said.

A Navy Special Warfare spokesperson verified to ABC News that when an enlisted person quits BUDS, they are moved out to a different part of the Navy — often to ships — and are indeed afforded a second chance to become a SEAL in time.

Barthel said he had not yet had a chance to review the newly unsealed search warrant.

“I haven’t even seen the search warrant, the affidavit, that’s gone out,” said Barthel. “But my understanding is that that was unsealed by the government so that they could release it to us as part of their discovery. But until we’re able to review all the evidence and do our own investigation, there’s not much that I can really say about the facts of the case.”

However, Barthel made clear that Mays maintains he had no role in setting a fire aboard the ship.

“I can say that my client has always denied any involvement with the fire on the Bonhomme Richard and he continues to do so,” Barthel added. “You know, he’s — he’s presumed innocent? And, you know, we’re just looking forward to the opportunity where we can review the evidence and prepare our case.”

“At this particular point in time, I’m not aware of anything that points directly at my client,” he said.

The search warrant detailed how federal arson investigators, searching the area where the fire originated, marked a bottle containing a suspicious liquid for later DNA and fingerprint testing.

That bottle could not be located the following day and while Mays’ unit was placed in that area on the day in question, a subsequent DNA test of the tag placed to mark the bottle was not a match for Mays’ DNA.

The search for the missing bottle led investigators from the Bureau of Alcohol, Tobacco, Firearms and Explosives to find additional bottles and cans containing suspicious liquids that pointed to arson.

An officer aboard the ship later pointed out to investigators that it seemed that three of the four fire suppression areas in the area where the fire started “appeared to have been purposely tampered with and/or disconnected” since a previous inspection two days before.

The blaze aboard the ship raged for four days with temperatures reaching as high as a 1,000 degrees Fahrenheit. The Navy ultimately decided that it was easier to scrap the ship rather than go through with $4 billion of repairs.