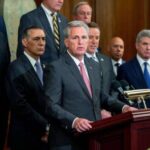 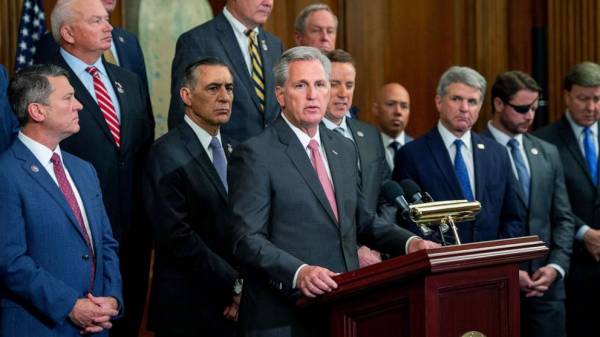 House Minority Leader Kevin McCarthy on Tuesday warned dozens of communications companies against cooperating with the House select committee investigating the Jan. 6 Capitol attack, saying that Republicans “will not forget” it if they retake the House.

His broadside was immediately criticized by Democrats and ethics experts, who accused him of violating House ethics rules and likened the statement to tampering with the congressional investigation.

Democrats’ “attempts to strong-arm private companies to turn over individuals’ private data would put every American with a phone or computer in the crosshairs of a surveillance state run by Democrat politicians,” McCarthy said in a statement posted to Twitter.

The select committee asked 35 companies on Monday to preserve records that could be relevant to its investigation into the Capitol attack and “efforts to delay or interfere” with the transfer of power after the 2020 election, which could be a precursor to more targeted subpoenas compelling the production of records.

While the requests didn’t mention any individuals by name, the select committee is expected to focus its inquiry on GOP lawmakers who communicated with former President Donald Trump on and around Jan. 6 regarding the election, along with the president’s close aides and family members.

McCarthy, whose own conversations with Trump were highlighted during the second impeachment trial, could be of interest to the panel’s investigation.

“This is very unusual for a member of Congress, especially someone in a leadership role in the House, to try to intervene and prevent a congressional committee from trying to do its job,” Craig Holman, a lobbyist for the nonpartisan watchdog group Public Citizen, told ABC News.

“By demanding that no one participate with the select committee, he is undermining the credibility of Congress itself,” he said, suggesting that McCarthy’s comments were in violation of House Rule 23, which requires members to “behave at all times in a manner that shall reflect creditably on the House.”

Holman said Public Citizen would consider filing a complaint against McCarthy with the Office of Congressional Ethics, the independent congressional ethics office, should no member ask the House Ethics Committee to consider the matter directly. That office could refer its review to the ethics panel, which could decide whether to investigate the matter further or sanction McCarthy.

In his statement, McCarthy also accused Democrats of asking companies to violate federal law, though his office did not respond to questions from ABC News asking for the specific statute he referenced.

“It’s not illegal for the select committee to request that the companies preserve the records, and to demand that the records be turned over under subpoena if the committee can produce sufficient evidence to warrant that action,” Holman said.

In response to McCarthy, the select committee said it had asked companies “not to destroy records” that could aid in its inquiry, and that the panel “won’t be deterred by those who want to whitewash or cover up the events of January 6th, or obstruct our investigation.”

“To me, that’s pretty straight-up intimidation and obstruction,” Rep. Eric Swalwell, D-Calif., a former prosecutor who served as an impeachment manager after the Jan. 6 attack, told ABC News. “It’s the congressional equivalent of ‘snitches get stitches.’ That’s kind of what he’s telling them.”

Zach Wamp, a former GOP congressman from Tennessee who co-chairs the Reformers Caucus for Issue One, a government reform advocacy group, criticized his former colleague’s statement.

“It’s not in his best interest or the right thing to do,” Wamp said of McCarthy. “You can’t have an investigation without knowing who talked to who, and when.”

“There are Republicans who may have things to hide, but it’s not Kevin McCarthy,” he said.

“If this turns into a really broad request not tied to individuals, there are Fourth Amendment concerns,” Jonathan Bydlak, the director of the Governance Program at the R Street Institute, told ABC News. “But I don’t think that’s what we’re talking about right now.”

Bydlak noted that McCarthy, as the top House Republican vote counter in 2013, was among the majority of House members to oppose an amendment restricting the National Security Agency’s collection of phone records.

“When you compare what he’s saying now to the opposition he’s expressed in the past to NSA collection of bulk metadata, it’s really hard to not come to the conclusion that these remarks are being driven by partisan concerns, and not ideological and principled concerns about government access to private data,” Bydlak said.

Other Republican lawmakers have also bristled at the panel’s preservation request.

“There weren’t any text messages that I can recall with the President of the United States. Certainly, I communicate with other congressmen on a regular basis,” Rep. Mo Brooks, R-Alabama, who strategized with other Republicans at the White House about how to derail the Jan. 6 electoral vote count, told Newsmax.

Brooks, who is running for Senate, encouraged Trump supporters to “start taking down names and kicking a**” and asked if they were ready to “fight for America” at a rally outside the White House on Jan. 6. He later said he was not encouraging violence.

“I haven’t gone over those text messages but I assume on one side or the other there are some caustic words used to describe what is going on in our country … but those are private communications,” Brooks told Newsmax.