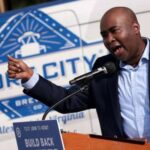 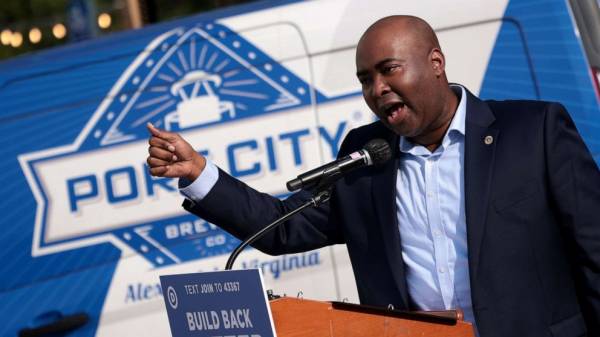 ALEXANDRIA, VA. — The Senate-passed bipartisan infrastructure bill is on hold until the Senate also sends the House a budget bill including other key Democratic priorities, but Democratic National Committee Chairman Jaime Harrison is confident party leadership will get both bills to President Joe Biden’s desk.

Harrison said he remains positive even as some key moderates remain opposed to the current $3.5 trillion price tag of the budget bill.

“You go through this process in the legislative process. It’s the push and pull that you get, you know, this group wants this, this group wants that,” Harrison told ABC News in a brief interview. “And at the end of the day, you’ve got two of the most masterful dealmakers on the Hill in Nancy Pelosi and Chuck Schumer. I’m sure they’re going to be able to get it done.”

Following a gaggle with reporters, Harrison spoke exclusively to ABC News after the kickoff event in Virginia for the DNC’s “Build Back Better” bus tour to promote Biden’s agenda during the congressional recess. Former Virginia Gov. Terry McAuliffe, who’s campaigning to return to the governor’s mansion, joined Harrison at the event, along with lieutenant governor nominee Hala Ayala, Rep. Don Beyer and both the speaker and majority leader of the House of Delegates.

Throughout the bus tour, which will make stops in more than 10 states nationwide, Harrison will be joined by governors, mayors and members of Congress to tell voters what Democrats have delivered so far under the Biden administration.

“We’re going across the country … making sure that we put out the message and letting people know whether or not their representative actually delivered,” Harrison told ABC News, mentioning future stops to North Carolina and South Carolina, his home state where he broke fundraising records in his unsuccessful bid against Republican Sen. Lindsey Graham last year.

In a statement, Republican National Committee spokesperson Savannah Viar said that DNC is trying to “convince Virginians that the ‘D’ in Democrats stands for ‘deliver.’

“However, Virginians know that the ‘D’ in Democrats really stands for disappointing, disorganized, and disastrous,” Viar said.

Asked about comments reportedly made by Democratic Congressional Committee Chairman Sean Patrick Maloney this month that if the 2022 general election were held right now, Democrats would lose their slim majority in the House without a messaging reboot, Harrison said the message going into the midterms needs to be “that Democrats deliver.”

Democrats need to take credit for what they passed, he said, mentioning the child tax credit and loans through the Paycheck Protection Program.

“It’s connecting the dots … so that they understand that they are seeing in the improvements in their lives is happening because of the Democratic leadership. We didn’t do a good job of that in the last Democratic administration,” Harrison said.

In his gubernatorial campaign, McAuliffe, a former DNC chairman, has also touted the Democrats’ agenda in Washington, closely aligning himself with the president, his friend of 40 years.

“Because of Joe Biden and ‘Build Back Better,’ businesses are still in business that would not be in business… 7 million of the 8 and a half million Virginians benefited from the American Rescue Plan, think of that — $7 billion of economic activity was brought here to the Commonwealth of Virginia for our PPP loans,” McAuliffe said in Virginia Thursday. “So Joe Biden and the Democrats are the ones who have lifted up every small business here in Virginia and across this country.”

Asked by ABC News about Speaker Nancy Pelosi’s plan to wait to take up the bipartisan infrastructure bill — which includes significant investments in expanding broadband, a key promise McAuliffe has made to Virginians in his campaign — until Democrats in the Senate also deliver on the pricey budget bill, McAuliffe said, “My only message to the United States Congress is pass it, and pass it as fast as you can.”