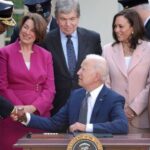 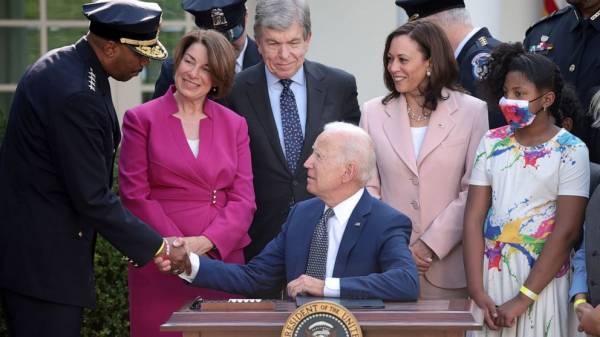 “We cannot allow history to be rewritten. We cannot allow the heroism of these officers to be forgotten. We have to understand what happened — the honest and unvarnished truth. We have to face it,” Biden said in remarks in the White House Rose Garden, speaking to lawmakers, law enforcement officers and their families.

Biden said the Jan. 6 assault presented a dark test of “whether our democracy could survive, whether it could overcome lies and overcome the fury of a few who were seeking to thwart the will of the many.”

Jim Watson/AFP via Getty ImagesVice President Kamala Harris listens to President Joe Biden in the Rose Garden of the White House in Washington, Aug. 5, 2021, before he signs a bill awarding the Congressional Gold Medal to law enforcement officers who protected members of Congress on Capitol Hill during the January 6 riot.

“While the attack on our values and our votes shocked and saddened the nation, democracy did survive,” Biden said firmly. “Truth defeated lies. We did overcome. That’s because of the women and men of the U.S. Capitol Police, Washington, D.C. Metropolitan Police Department and other law enforcement officials we honor today.”

Police officers fielded greetings from some of the lawmakers they protected, including House Speaker Nancy Pelosi, Senate Majority Leader Chuck Schumer, Senate Rule Committee Chair Sen. Amy Klobuchar, D-Minn., and other senators who co-sponsored the bill, for the afternoon ceremony.

Also present was the mother of Capitol Police officer Brian Sicknick, who lobbied Congress to pass legislation for a bipartisan select commission to investigate the attack, which Senate Republicans ultimately blocked. Biden offered his condolences to Sicknick’s family and families of other fallen officers in his remarks, including the children of fallen Capitol Police officer Billy Evans who was killed in a separate attack on the Capitol in April.

“I offer you, not only our condolences but recognize your courage. The courage of your children. And you have our most profound gratitude,” Biden said.

Win Mcnamee/Getty ImagesPresident Joe Biden, joined by lawmakers and members of law enforcement and their families, signs legislation to award congressional gold medals to law enforcement in the Rose Garden of the White House on Aug. 5, 2021.

The bipartisan legislation authorizes the creation of four medals — one for the Capitol Police, one for the Metropolitan Police Department of Washington, DC, one for display by the Smithsonian to acknowledge other agencies that helped defend the building and a fourth at the Capitol.

Biden said the medals would serve as a reminder of the truth of the attack.

“My fellow Americans, we must all do our part to protect and to preserve our democracy. It requires people of goodwill and courage to stand up to the hate, the lies, the extremism that led to this vicious attack,” he said. “It requires all of us working together — Democrats Republicans, Independents, on behalf of the common good to restore decency, honor and respect for our system of government.”

Vice President Kamala Harris, speaking ahead of Biden, recalled returning to the Senate chamber around 8 p.m. after the riot and witnessing American democracy persevere.

“As those officers continued, even at that late hour, to secure our Capitol, they secured our democracy. So, let us never forget that. And let us always remember their courage,” she added.

The Senate voted unanimously on Tuesday to pass the legislation without a recorded vote, a rarity in a polarized Washington. The House passed the bill back in June with 21 Republicans voting against it.

“I am still stunned by what happened in the House, where 21 members of the Republican caucus voted against this legislation,” Schumer said Tuesday. “The Senate is different.”

MORE: Mitt Romney thanks Capitol Officer Eugene Goodman for leading him away from rioters

The event falls in the grim shadow of the Washington Metropolitan Police Department announcing this week that two officers who responded to the Jan. 6 riot died by suicide in July.

It also comes as the House select committee investigates the Capitol attack, holding its first hearing in which lawmakers heard dramatic, emotional accounts from officers who defended the building. They all detailed fearing for their lives the day as the Capitol building devolved into “a medieval battle,” as one officer described it.

Some 140 police officers suffered injuries during the attack and 15 were hospitalized.

In the months since, law enforcement suicide experts say the families of those who responded to the incident say they’ve behaved differently. Karen Solomon, who runs Blue H.E.L.P, a nonprofit that works on reducing the stigma of mental health issues in law enforcement, told ABC News, “We are still ignoring the needs of some of the victims of this event — the police officers.”

Jim Watson/AFP via Getty ImagesVice President Kamala Harris listens to President Joe Biden in the Rose Garden of the White House in Washington, Aug. 5, 2021, before he signs a bill awarding the Congressional Gold Medal to law enforcement officers who protected members of Congress on Capitol Hill during the January 6 riot.MORE: Key takeaways from Jan. 6 hearing: Powerful testimony counters revisionist history

Metropolitan Police Department officers Michael Fanone, also present on Thursday and seen sharing a hug with Pelosi, is among the voices who have flatly rejected any attempts to rewrite history and downplay the attack as something the country should move on from.

“The indifference shown to my colleagues is disgraceful,” he said, slamming his fist on a congressional witness table last month. “I feel like I went to hell and back to protect them and the people in this room, but too many are now telling me that hell doesn’t exist or that hell actually wasn’t that bad.”

Previous : Neanderthals Could Have Died Out Because of Sex With Humans, New Study Suggests
Next : Blinken acknowledges ‘growing concerns’ about Havana syndrome, will meet affected personnel ‘soon’