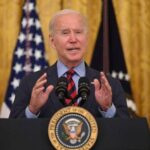 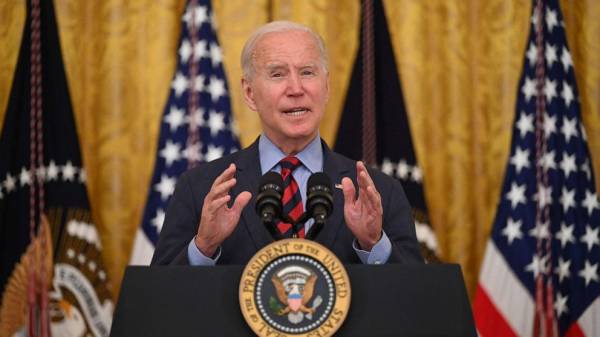 The war of words between President Joe Biden, Florida Gov. Ron DeSantis and other GOP governors escalated Thursday, raising new questions about how much politics and politicians should be involved in potentially life or death public health decisions.

At the White House, Biden addressed the ongoing debate — and in some cases, outright cultural war — around children being required to wear masks in school, arguing it shouldn’t be a “political dispute” even though that’s clearly what much of it has become.

“This isn’t about politics. This is about keeping our children safe,” he said. “To the mayors, school superintendents, educators, local leaders, who are standing up to the governors politicizing mask protection for our kids, thank you.”

Under pressure to act more forcefully as the delta variant rages across the South, Biden said earlier this week the White House is “checking” into how much power the federal government has to intervene as DeSantis threatened to withhold state funding from schools and officials adopting mask mandates in Florida — the state with the highest number of pediatric COVID-19 cases as kids head back to school.

Evan Vucci/APPresident Joe Biden speaks about prescription drug prices and his “Build Back Better” agenda from the East Room of the White House, Aug. 12, 2021.

It comes after weeks of growing tensions as some Republican governors — particularly in Florida and Texas — continue to fight against mask and vaccine mandates as COVID-19 cases skyrocket in their states. It also follows the Centers for Disease Control and Prevention issuing new guidance recommending indoor masking across-the-board for all staff, students and visitors to K-12 schools, regardless of vaccination status.

Arthur Caplan, a bioethicist expert and founder of the Division of Medical Ethics at the New York University School of Medicine, told ABC News that while the federal government has the authority to intervene — and should — it’s the responsibility of elected officials at the state and local level to rely on experts and not make public health decisions colored by appeals to their political base.

“Politicians have to, in a plague, yield to the best science and medical opinion, consensus opinion, that they can get,” Caplan said. “People who often did not take any science classes past high school should not be telling us how best to manage an infectious disease outbreak.”

Even the most scientific minds, however, can be influenced by politics. Centers for Disease Control and Prevention expert Dr. Rochelle Walensky, in an interview published Thursday, hinted at regretting her decision in May to ditch masks if you’re vaccinated.

“There was an enormous pressure for vaccinated people to be able to do things that they wanted to get back to doing,” she told the Wall Street Journal.

Brandon Bell/Getty ImagesA child dangles a mask while waiting outside of the Houston Methodist Hospital, July 16, 2021, in Houston, Texas.

Under pressure to follow the science, but also no doubt aware of polls showing what Americans want, Biden has often repeated he’s leaning on health experts like the nation’s top infectious disease expert, Dr. Anthony Fauci in making his decisions, putting the onus on local leaders to take precautions, and not, as some critics have urged, using his presidential powers and influence to take more actions at the federal level.

DeSantis has taken a different approach with his political base, sending fundraising emails in recent weeks exploiting the conservative animosity toward the president and Fauci.

Speaking on ABC’s “GMA3” on Thursday, Fauci said it’s “so unfortunate” that an “ideological divide” is stopping some people from getting vaccinated.

Caplan also said it’s political — and the result, in the case of DeSantis, is harming the people of Florida and beyond.

“The core of his party is still anti-mandates, whether it’s vaccine or masks, and has never shown any enthusiasm for tough public health measures, that’s just political and it is true, despite the fact that Trump is vaccinated, Abbott is vaccinated,” Caplan said. “It’s not like conservative GOP leadership hasn’t been vaccinated.”

But thousands of their constituents are not.

An ABC News/Washington Post poll from July illustrates how partisanship has infected pandemic attitudes and behavior.

Ninety-three percent of Democrats say they either have been vaccinated or definitely or probably will do so; that plummets to 49% of Republicans. Independents are between the two at 65%. And while Republicans are far less likely to get a shot, just 24% see themselves as at risk for infection.

“The bottom line is, look at a map, see where the dead and hospitalized people are, then ask yourself, if the governor’s policies in Texas and Florida make any sense,” Caplan said.

Some Republican governors who have issued orders effectively forbidding local officials from requiring masks in schools, continued with a firing exchange of words with the White House this week as kids, many too young to be vaccinated, head back to the classrooms across the country.

Asked on Wednesday about a recent New York Post headline framing Biden as “kneecapping” DeSantis, White House press secretary Jen Psaki said the administration is not out to get DeSantis but wants him to participate in their efforts to combat COVID-19 — which, she said, he has not.

“Our war is not on DeSantis. It’s on the virus, which we’re trying to kneecap, and he does not seem to want to participate in that effort to kneecap the virus — hence our concern,” she said at an afternoon press briefing.

DeSantis slammed the White House earlier Wednesday and vowed that he would “fight back vociferously” against any attempt by the administration to find a way to pay the salaries of school officials that defy his state ban on mask mandates as he threatens to withhold state funding from those that adopt them.

“If you’re talking about the federal government coming in and overruling parents and our communities, that would be something that we would fight back vociferously against,” DeSantis told reporters in St. Petersburg outside of an elementary school.

The governor is facing at least two lawsuits from parents, and several school districts in Florida have already voted to mandate masks despite his executive order, citing data in their lawsuits that masks are proven to help slow the spread and noting that most kids are still too young to be eligible for vaccinations.

“It is a common sense, reasonable accommodation for a vulnerable child who is immunocompromised or at risk of a serious disease to require a public entity to implement simple precautions to ensure that the most vulnerable children are safe,” one lawsuit said, adding the order allegedly “harms the children who the disability discrimination laws were enacted to protect.”

Adolphe Pierre-Louis/Albuquerque Journal via ZUMA Wire via NewscomThird graders at Lavaland Elementary School wash their hands after recess before heading back to the classroo, Aug. 4, 2021, in Albuquerque.

The White House has praised the “courage” of school officials who have chosen to defy the order and said it’s looking into whether unused funding from the federal government’s American Rescue Plan could be used to make up the difference in funds DeSantis threatens to withhold. Texas, meanwhile, is dealing a similar hand.

Since Biden last week called out Texas Gov. Greg Abbott by name, along with DeSantis, as leaders who need to “help or get out of the way,” Abbott has also stuck defiantly behind his order banning mask mandates — despite hospitals becoming so overwhelmed that Abbot has called for out-of-state medical personnel to come help mitigate the surge of COVID-19 cases there.

Under Abbott’s order, institutions that defy the governor’s mask mandate ban are subject to a $1,000 fine. At least two school districts there have announced they still will require masks, and the tides appear to be turning in their favor.

He threatened in a tweet late Wednesday to take districts that defy him to court.

“Any school district, public university, or local government official that decides to defy GA-38—which prohibits gov’t entities from mandating masks—will be taken to court,” Abbott said in a tweet.

Amid the growing concerns with sending kids back to school amid a surge in pediatric COVID-19 cases, it’s not clear under what authority the White House will actually step in when it comes to fines to educators. Psaki reiterated on Wednesday they are “looking into ways we can help the leaders at the local level who are putting public health first continue to do their jobs,” and speaking with the Department of Education.

Biden took a shot at those governors restricting schools’ abilities to issue mandates on Tuesday, without naming names, saying, “I find that totally counterintuitive and, quite frankly, disingenuous” but admitted he didn’t currently believe he had the authority under law to directly intervene on any state government’s mask mandate.

“I don’t believe that I do, thus far. We’re checking that,” Biden said.

Jim Watson/AFP via Getty ImagesPresident Joe Biden speaks about Covid vaccinations and his Administrations progress toward fighting this pandemic in the East Room of the White House in Washington, Aug. 3, 2021.

Caplan told ABC News that the federal government “can and should” look at ways in which Texas and Florida are gaining certain federal benefits and suspend them — “until they drop these absurd prohibitions and return to solid public health advice.”

“I would try to turn up the pain on the governors in terms of economic consequences of their ill-thought-out, morally wrong policies, and the justification is you’re putting the rest of the country at risk,” Caplan said. “Because not only are they endangering their own state residents, they’re putting the rest of us at risk.”