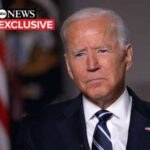 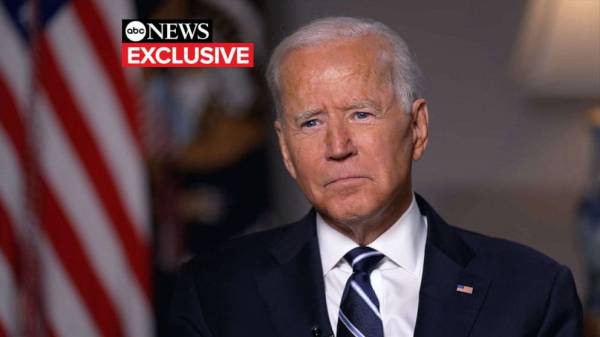 When President Joe Biden marked his 100th day in office, both the pandemic and the American occupation of Afghanistan seemed like they would soon be in the rearview mirror. Just over a hundred days later, the sudden resurgence of the coronavirus and the Taliban are twin crises with the potential to sink his reputation on the world stage.

In an exclusive interview with ABC News’ George Stephanopoulos, the president defended his administration’s strategy on both fronts, despite facing waves of criticism over the chaotic military exit and plans to offer booster shots while many countries can’t immunize even their most at-risk populations.

Biden insisted the drawdown in Afghanistan was a “simple choice,” and could not have been carried out more effectively.

“So you don’t think this exit could have been handled better in any way, no mistakes?” Stephanopoulos asked.

“We’re gonna go back in hindsight and look, but the idea that somehow there’s a way to have gotten out without chaos ensuing, I don’t know how that happens,” Biden said.

But when Biden announced the plans for the withdrawal in April, he did not foreshadow mayhem, saying instead that the exit would be done “responsibly, deliberately, and safely.” And in the months that followed, he repeatedly dismissed the possibility of a Taliban takeover.

Stephanopoulos pressed Biden on if there had been a breakdown in intelligence.

“I think there was no consensus. If you go back and look at the intelligence reports, they said that it was more likely to be sometime by the end of the year,” Biden said.

“But, you didn’t put a timeline out when you said it was highly unlikely. You just said flat out it’s highly unlikely the Taliban would take over,” Stephanopoulos responded.

“The idea that the Taliban would take over was premised on the notion that somehow, the 300,000 troops we had trained and equipped was gonna just collapse, they were gonna give up,” Biden replied. “I don’t think anybody anticipated that.”

Biden committed to keeping American soldiers on the ground until every American who wants to be evacuated can be, even if it means keeping a troop presence past the end of the month.

As for the nation’s Afghan allies who now fear retaliation from the Taliban, Biden said the U.S. would relocate as many as possible.

“The commitment holds to get everyone out that, in fact, we can get out and everyone who should come out. And that’s the objective. That’s what we’re doing now. That’s the path we’re on. And I think we’ll get there,” he said.

The scenes of bedlam at the Kabul airport played out just two months after the president’s first foreign trip in office, a mission meant to shore up relationships with key European allies that were strained during the Trump administration. During the tour, the president repeatedly declared, “America is back,” and ready to again take the helm on global issues.

Biden now defensively asserts that the bleak end to the military mission in Afghanistan doesn’t belie that promise.

“Before I made this decision, I met with all our allies, our NATO allies in Europe. They agreed, we should be getting out,” he said, adding that he was working the phones to make sure he and other world leaders “have a coherent view of how we’re going to deal from this point on.”

Whether the U.S. will recognize the Taliban’s rule remains to be seen. The president said he did not believe the group had reformed since it brutally wielded power over Afghanistan at the turn of the millennium, but that “the way to deal with that is putting economic, diplomatic, and international pressure on them to change their behavior.”

The president also said Afghanistan is not the same incubator of extremism that it was before the Sept. 11 terror attacks.

“My dad used to have an expression,” Biden continued. “If everything is equally important to you, nothing is important to you. We should be focusing on where the threat is the greatest.”

Nearly a year and a half into the global COVID-19 pandemic, the virus remains one of the greatest threats to the American public. On Wednesday, the Biden administration announced plans to begin rolling out booster shots, explaining that the move was necessary to stay ahead of the virus, especially amid the surging delta variant.

Other wealthy nations will also offer boosters, but low- and middle-income countries are still struggling to access vaccines. In the poorest countries, only about 1% of the population has received even a single dose, according to the Kaiser Family Foundation.

The World Health Organization slammed booster shots, equating giving third injections to handing out extra life jackets to people who already have them “while we’re leaving other people to drown without a single life jacket.”

“Are you comfortable with Americans getting a third shot when so many millions around the world haven’t had their first?” Stephanopoulos asked the president.

The president said he and the first lady will roll up their sleeves again soon.

“We got our shots, all the way back in, I think December. So it’s past time,” Biden said.