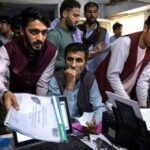 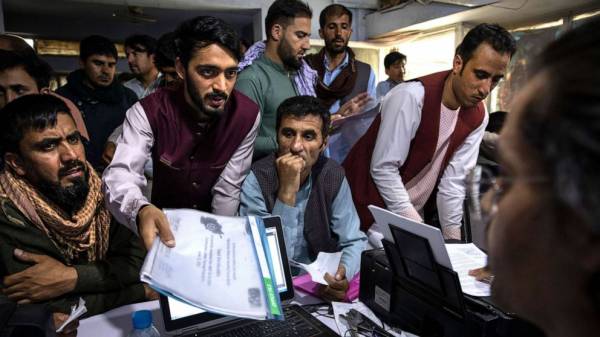 “It was demons from everything — the war, everything he saw,” said his brother Andy Truhn.

Four days after Truhn’s wedding in 2016, the U.S. Army sergeant and defense contractor, who spent years in Afghanistan, died by suicide — a shock from which Truhn said their family has still not recovered.

But now, as the Afghan government collapses and the Taliban negotiate to seize Kabul, Truhn worries the war will destroy the life of another “brother”: Ismail.

MORE: In urgent cable, US Embassy calls on Washington to evacuate Afghan staffers threatened by Taliban

The Afghan father of four in Kabul worked with Speikhout at Bagram Air Base for four years as a translator, guide and armed guard — frequently putting his life on the line for American, British and Australian contractors.

Threatened by the Taliban because of that service, Ismail applied for a special immigrant visa in 2011 to move his young family to the U.S. Speikhout wrote a letter in support of his “very intelligent, honest, well educated” friend, who Truhn said he described as a “brother.”

In 2017, however, Ismail — whose last name ABC News is not using for his security — was shocked to find his application was denied. The U.S. Embassy said it was because they were “unable to confirm the validity” of his letter of recommendation and unable to reach Speikhout, who had died eight months prior.

Ryan JacksonSgt. John Speikhout, a U.S. Army veteran from Three Oaks, Michigan, seen here during his service in Afghanistan, wrote a letter to support his Afghan colleague’s visa application. He died by suicide in 2016.

Ismail is one of tens of thousands of Afghans who are unable to secure visas or a seat on an evacuation flight. They now fear for their lives because of their U.S. ties, as the Taliban come to power again after President Joe Biden ordered U.S. troops to withdraw.

For the thousands of Americans who served in Afghanistan and are watching from afar, there is horror, shock and disgust — a bitter close to two decades of war that have irrevocably altered American and Afghan lives.

“Despite their ongoing support for our war over there, in the end, once their usefulness is concluded, so is our care for their situation. I feel like we abandoned our allies over there, and it’s disgusting,” said Ryan Jackson, a U.S. defense contractor who served with Ismail and Speikhout.

MORE: US to offer refugee status to Afghans at risk because of American ties amid growing Taliban threat

Biden has said the U.S. will help Afghans who helped Americans. There are approximately 20,000 Afghans who have applied for special immigrant visas for their service to the U.S. military and diplomatic missions, according to the State Department, but thousands of other Afghans who don’t qualify for that specific visa program are still desperate to escape.

For now, however, Biden’s plans for evacuations only apply to an even smaller group — those who have been granted conditional approval for a visa by the U.S. Embassy. Totaling some 5,000, according to the State Department, these interpreters, guides and other contractors will be evacuated along with their family members by the thousands of U.S. troops that Biden is returning to Kabul.

Among them, approximately 4,000 Afghans — interpreters and families — who have cleared security vetting are being relocated directly to the U.S. Thousands more will be moved to U.S. military installations overseas to await security vetting, medical screenings and other final processing steps.

But those flights have not begun yet. A State Department official said there is still no final agreement with a country to host them, although negotiations with Qatar are close to being finalized.

Either way, Ismail is unlikely to be on one after his application was denied. In the years since, he has been unable to find another employee at the firm Global Integrated Security USA to verify his service on the U.S. Army Corps of Engineers contract because the firm dissolved, with no contact information for the Afghans it left behind.

“No contact, no office, no site to go and ask,” Ismail said. “Everyone that worked with the U.S. Army Corps of Engineers and U.S. military are really in danger.”

The Taliban’s political leadership has said interpreters and others who worked with the U.S. will not be harmed. But at least 300 have been killed since 2014, according to the advocacy group No One Left Behind, and a campaign of Taliban assassinations in the last year has targeted government officials, police and security forces, prominent women’s rights activists, journalists and more.

Sidiqullah Khan/APSmoke rises after fighting between the Taliban and Afghan security personnel in the city of Kandahar, southwest of Kabul, Afghanistan, Aug. 12, 2021.

Ismail has appealed his denial and hopes a new letter from Jackson, who served alongside him and Speikhout at Bagram Air Base for four years, will be accepted. But Jackson was not his direct supervisor, so his letter may not work — one of the rigorous rules of the special immigrant visa application process.

“We’re letting him down — not just him, I bet there’s 10,000 people with similar extenuating circumstances where they can’t just check this box and head to the airport to get evacuated,” said Jackson.

The State Department announced a new refugee program earlier this month that allows Afghans who don’t meet the requirements for a special immigrant visa to apply for refugee status. That includes interpreters and other contractors who worked for the U.S. for less than two years or worked for U.S.-funded projects, but not directly for the government, as well as Afghan journalists for U.S. media outlets.

But these Afghans have to flee the country first in order to apply, and a senior State Department official told reporters they are not planning to evacuate any of these individuals.

Rahmat Gul/APInternally displaced Afghans from northern provinces, who fled their home due to fighting between the Taliban and Afghan security personnel, take refuge in a public park Kabul, Afghanistan, Aug. 13, 2021.

In an internal cable obtained by ABC News Thursday, the U.S. Embassy in Kabul urged State Department leadership to change that, saying that Afghans “under threat because of their work with the U.S. government … cannot get out.”

“Any assumption that Afghan refugees can make their way to safety on foot does not reflect the new reality,” wrote Ambassador Ross Wilson, noting Taliban forces exercise control of more than half of the country’s border crossings, neighboring countries Iran and Pakistan are closing their borders to more refugees and most countries around the world are not offering Afghans visas to enter.

Commercial flight tickets from Kabul now also cost hundreds, if not thousands, of dollars, with nearly all sold out, and Wilson wrote that his team surveyed foreign embassies in Kabul and found virtually none are offering visas.

Ryan JacksonSgt. John Speikhout, a U.S. Army veteran from Three Oaks, Michigan, seen here during his service in Afghanistan, wrote a letter to support his Afghan colleague’s visa application. He died by suicide in 2016.

“The seriousness of this moment cannot be overstated. Our generation is facing its Saigon moment, and we must act. We are seeing an irreversible scenario where thousands of SIVs (special immigrant visa applicants) are behind Taliban lines with no hope of escaping,” said Chris Purdy, director of the advocacy group Veterans for American Ideals, referring to America’s exit from the Vietnam War.

For Truhn, it’s hard to watch the war that ruined his brother’s life now destroy those of the Afghans that Speikhout considered brothers.

“I know he would’ve done anything he could to get them to America, to keep them safe for what they’ve done for us,” he said, adding that Speikhout talked about having Afghan colleagues immigrate to the U.S. and live on his property, helping work his field of hops in southwestern Michigan.

Sajjad Hussain/AFP via Getty ImagesThe American flag is reflected on the windows of the U.S. embassy building in Kabul on July 30, 2021.

Instead, Truhn said he worries if Taliban fighters “realize who [Ismail] is, he’s definitely going to be dead — and we’re leaving him high and dry.”

So far, some 1,200 Afghans have been relocated to Fort Lee, a U.S. Army base in central Virginia. State Department spokesperson Ned Price said Thursday the administration will now “increase the pace of those relocation flights,” especially as thousands of U.S. troops are now in Afghanistan to help process cases.

What has not changed is the scope of who will be evacuated. For now, Ismail and his young family will be left waiting in Kabul in a state of high anxiety about what comes next.