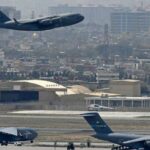 After 20 year, US ground troops leave Afghanistan, but Americans left behind 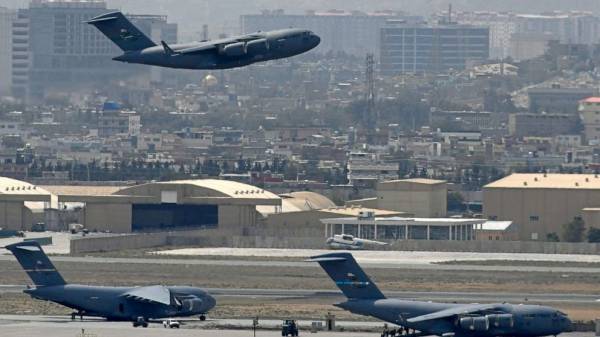 When it came to announcing that all U.S. troops had left Afghanistan, concluding America’s military ground presence there — and after 20 years the end to America’s longest war — word came not from President Joe Biden, who set the deadline, but from the top general overseeing the rushed and dangerous evacuation.

“I’m here to announce the completion of our withdrawal from Afghanistan and the end of the military mission to evacuate American citizens, third-country nationals and vulnerable Afghans,” he said, appearing on a television screen in the Pentagon Briefing Room.

To mark the moment for history, McKenzie noted the exact time the last U.S. military plane had cleared the skies — over the land where the U.S. had spent so much time, money, and most of all, American blood.

“The last C-17 lifted off from Kabul airport this afternoon at 3:29 p.m. East Coast Time and the last manned aircraft is now clearing airspace above Afghanistan,” he said, which would have one minute before midnight in Kabul.

Aamir Qureshi/AFP via Getty ImagesA U.S. Air Force aircraft takes off from the airport in Kabul, AFghanistan, on Aug. 30, 2021.

“Tonight’s withdrawal signifies both the end of the military component of the evacuation, but also the end of the nearly 20-year mission that began in Afghanistan shortly after Sept. 11 2001. It’s a mission that brought Osama Bin Laden to justice, along with many was Al Qaeda co-conspirators, and it was not — it was not a cheap mission,” he said.

“No words from me could possibly capture the full measure of sacrifices and accomplishments of those who served, nor the emotions they’re feeling at this moment. But I will say that I’m proud that both my son and I have been a part of it,” McKenzie said.

U.S. Marines via ReutersFlag-draped transfer cases of U.S. military service members who were killed by an August 26 suicide bombing at Kabul’s Hamid Karzai International Airport prior to a dignified transfer at Dover Air Force Base, Del., Aug. 29, 2021.

And while the military prides itself on leaving no one behind, McKenzie said Americans in “the very low hundreds,” who had wanted to leave, couldn’t get to the airport.

He said that in the five final flights that took off, no Americans made it on board. The U.S. had continued to reach out to Americans still there, he said, the military was “prepared to bring them on,” but none made it.

MORE: Afghanistan updates: All US troops have departed, Pentagon says

“While the military evacuation is complete, the diplomatic mission to ensure additional U.S. citizens and Afghans who want to leave continues,” he said.

It’s unclear what the evacuation picture will look like now that the U.S. military is gone. McKenzie repeated the U.S. is working with international partners to pressure the Taliban to ensure safe passage for those who want to leave, but the Taliban have also said at recent press conferences that they do not want Afghans to take their talents out of the country.

Biden, who has long opposed the war in Afghanistan, stuck to his decision to withdraw troops by the end of the month as the U.S. approaches 20 years since the Sept. 11 attacks, despite pressure from lawmakers and other allied nations to extend the mission.

The president did not speak on Monday but released a written statement following McKenzie’s remarks thanking commanders and service members for completing the withdrawal on schedule and “with no further loss of American lives” and praising the evacuation effort as “the largest airlift in US history.”

He said he would address the American people on Tuesday on his decision not to extend the U.S. military’s presence.

Saul Loeb/AFP via Getty ImagesPresident Joe Biden, center, attends the dignified transfer of the remains of a fallen service members at Dover Air Force Base, Aug. 29, 2021, in Dover, Delaware.

“For now, I will report that it was the unanimous recommendation of the Joint Chiefs and of all of our commanders on the ground to end our airlift mission as planned,” he said in the statement, although military leaders had lobbied Biden earlier this year to leave a residual U.S. force in Afghanistan to support the Afghan army and government.

He closed by listing the names of the 13 service members in last week’s attack “who lost their lives last week to save tens of thousands.”

Secretary of State Antony Blinken, in remarks Monday following a virtual meeting with allied nations on Afghanistan, announced the U.S. Embassy in Kabul was moved to Doha, Qatar.

“A new chapter of America’s engagement with Afghanistan has begun — one in which we’ll lead with diplomacy. The military mission has ended, new diplomatic mission has begun,” he said.

Blinken said that the exit of U.S. diplomats was the “prudent” step to take because of the security threat.

Marcus Yam/Los Angeles Times via PolarisRelatives and neighbors of the Ahmadi family gathered around the incinerated husk of a vehicle targeted and hit earlier Sunday afternoon by an American drone strike, in Kabul, Afghanistan, Aug. 30, 2021.

Ambassador John Bass — the former U.S. ambassador to Afghanistan who returned to Kabul to oversee the evacuation operation — will lead an ongoing effort to get Americans, Afghans and other foreigners out of Afghanistan in the weeks to come, Blinken announced.

“We will continue our relentless efforts to help Americans, foreign nationals and Afghans leave Afghanistan if they choose,” Blinken said.

Overall, Blinken said he believes there is still a “small number of Americans — under 200, and likely closer to 100 — who remain in Afghanistan and want to leave.”

Even for those who have said they want to stay, Blinken said, the U.S. would still work to get them out if they changed their minds.

He also pledged to the Afghans who worked alongside the U.S., who wanted to leave but were unable to get out, the U.S. would continue to try to help them.

“Our commitment to them has no deadline,” he said.

He did temper expectations.

“We have no illusion that any of this will be easy,” Blinken said. “Or rapid. This will be an entirely different phase from the evacuation that just concluded. It will take time to work through a new set of challenges.”

Jonathan Ernst/ReutersSecretary of State Antony Blinken delivers remarks following talks on the situation in Afghanistan, at the State Department in Washington, D.C., Aug. 30, 2021.

Following the Pentagon’s announcement, GOP lawmakers blasted Biden for withdrawing troops despite not having all Americans evacuated with Sen. Ben Sasse, R-Neb., calling the evacuation a “national disgrace” and a “direct result of President Biden’s cowardice and incompetence.”

Sen. Bill Hagerty, R-Tenn., a member of the Senate Foreign Relations Committee, also said in a statement that Biden “will forever be remembered for leaving American citizens and U.S. legal permanent residents behind and in harm’s way in Afghanistan.”

The end of the war

In the final days, as the U.S. was set to withdraw forces, the Taliban seized and overtook the presidential palace in Kabul on Aug. 15 after Afghan President Ashraf Ghani fled his home country for the United Arab Emirates, leading to the collapse of the Afghan government.

The Pentagon sent in 6,000 troops, the U.S. Embassy in Kabul was evacuated and chaos has since enveloped the capital city, bringing the 20-year war to a grim end.

Shakib Rahmani/AFP via Getty ImagesAfghan people sit inside a U.S military aircraft to leave Afghanistan, at the military airport in Kabul on Aug. 19, 2021 after Taliban’s military takeover of Afghanistan.

In total, U.S. and coalition aircraft combined to evacuate more than 123,000 civilians.

MORE: Blinken says 'no deadline' to get out Americans, Afghans, but many will be left behind by evacuation flights

ISIS-K, an affiliate of the Islamic State in Afghanistan which is a sworn enemy of both the U.S. and the Taliban, claimed responsibility for attacks on American forces amid heightened fears fighters will force Afghanistan to break out into another civil war.

Over the weekend, the U.S. struck two ISIS-K targets in Afghanistan, including a person it said was involved in planning future attacks.

An Afghan health official reported that in one of those strikes, at least six Afghan civilians were also killed, including four children.