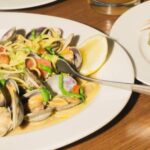 Seafood Towers at Margie’s in the Rockaways

For some city dwellers, Rockaway Peninsula, in Queens, is exactly the opposite of its eponymous Ramones song (“It’s not hard, not far to reach / We can hitch a ride to Rockaway Beach”); rather, it is so hard and so far to reach that it’s merely a composite of faraway stories. There’s the one, from back in the nineteen-forties, of its middle-class resort heyday, and the one of sagging bungalows and drug-infested public housing under Robert Moses. Fast-forward to the past decade and there’s Hurricane Sandy, and the ravages of a once-in-a-century pandemic. 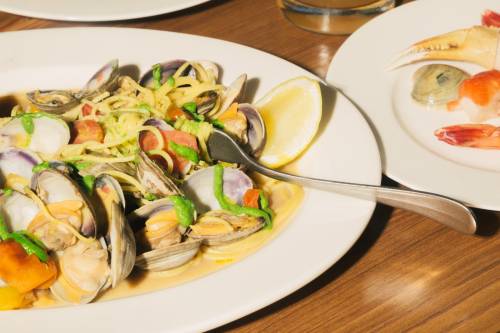 Part of the pleasure of dining at Margie’s is its earnest lack of frills and its familial atmosphere.

Terence Tubridy—who grew up in the Rockaways and is a partner at Margie’s, the flagship restaurant of the recently opened Rockaway Hotel—told me that, like his birthplace, his grandmother, after whom the restaurant is named, was a survivor. An Irish immigrant, she moved from Washington Heights to Rockaway and raised four kids while working as a server. “Our family history is also a Rockaway story,” Tubridy said. “Grandma Margie would have told it well at one of her parties. No one was a better host.” 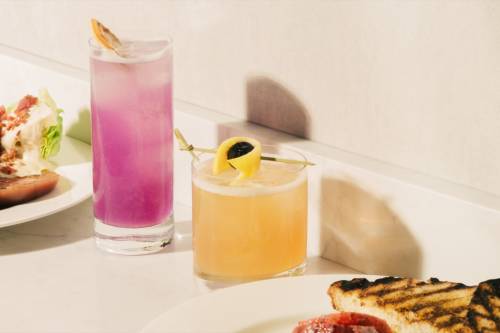 Cocktail hour might begin with an EZ-Pass, a crisp combination of vodka, lavender, lemon, and club soda that goes down as smoothly as seagulls following the breeze.

Cocktail hour might begin at the rooftop bar, with an EZ-Pass, a crisp combination of vodka, lavender, lemon, and club soda that goes down as smoothly as seagulls following the breeze. The bar shares an appetizer menu with the restaurant; in the gloaming, the seafood towers sparkle. When the oysters, cherrystone clams, and snow-crab claws arrive, their colors vivid enough to match the flaming sunset draped over the gray Manhattan skyline, you might take a languid sip of your drink and wonder why anyone would choose to live over there when she could curl up here. 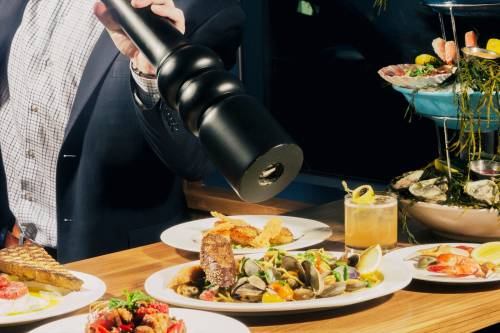 Per the restaurant’s mission to hire local and revitalize the community, many of its young employees live nearby.

Were Margie to narrate her own story, Tubridy surmised, as he pointed out Polaroids of his young grandmother adorning the capacious brasserie-style dining room, a guiding principle would be “If you’re humble, you never stumble.” The starters—mac and cheese, burrata, mussels—blithely observe this precept: unfussy, forthright, hearty. A fanciful twist comes in the lobster toast, bathed in the coral silk of its own bisque. Initially wary of its apparent goopiness, a diner noted with surprised approval that the toasted brioche, enlivened by blistered shishito peppers, tasted like a summery, savory obverse of French toast. It pairs well with the panzanella, a Tuscan bread salad that here includes grilled peppers, capers, and whipped ricotta. Rivalling the freshness of the seafood were early-season heirloom tomatoes, which in their bulging sensuousness appeared to one diner as “positively pornographic.”

When the restaurant gets busy, some details go amiss. A pretty plate of handmade pappardelle heaped with asparagus, fava beans, and basil pesto arrived twenty-five minutes after the other mains, curiously absent of salt. A wimpy-looking mahi-mahi was so difficult to debone that a server wound up taking over the laborious affair. 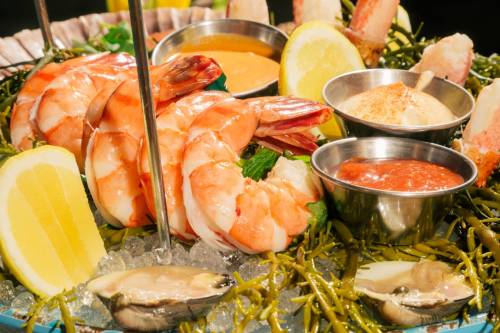 Served in the brasserie-style dining room, most of the dishes are unfussy, forthright, and hearty.

Still, part of the pleasure of dining at Margie’s is its earnest lack of frills and its familial atmosphere. When Winston, a jovial seventeen-year-old senior at Far Rockaway High School, stopped to chat while clearing dishes, it was hard not to feel like a guest at an intergenerational dinner. Per the restaurant’s mission to hire local and revitalize the community, many of its young employees live nearby. Winston didn’t know the Ramones off the top of his head, but to him Rockaway Beach wasn’t a tune or a tourist destination. The beach was a large part of why folks came to Margie’s, and Margie’s was the first job of his life. It would be four years until he could legally drink, but three months into the job he preferred clearing the lighter cocktail glasses to the heavier plates. “Balancing utensils isn’t always easy,” the young man said. “Not dropping things—who knew that would be the hardest part of the job?” (Entrées $14-$65.) ♦

Previous : 5 things to know about the new UN report on climate change
Next : Time is running out to save Afghans who helped US troops