What did I expect of “Greater New York,” a show of hundreds of works by forty-seven more or less contemporary artists and collectives at Moma PS1? I know what I fantasized: the discovery of things that creators hereabouts have been up to during a year and a half in pandemic isolation. This was a foolish mistake on my part, ignoring the fact that the survey—the fifth that PS1 has mounted since 2000—was slated to open in 2020 and necessarily postponed. The result, with the exception of a number of up-to-date entries, amounts to something of a time capsule: a collection of judgments that predate a period so tumultuous it feels like an age. One current trend that is represented, albeit scrappily, is neo-Surrealism: the wild subjectivity of artists turning from outer worlds to inner. But the fundamental mood is external, slanted toward politically charged urgencies and the proclivities of eccentric though not quite outsider talents. A consensus is projected that scants aesthetics.

Abundant artists’ photographs document half a century of social activism in New York City, starting with Puerto Rican protests in the sixties and brushing up against the Black Lives Matter demonstrations of 2020. Almost a hundred works, in all mediums, were created before the year 2000. Nine of the artists are deceased. The show’s chief appeal is an emphasis on foreign-born residents, historically a cynosure of New York as a bubbling rather than a melting pot. There are contributions by people from Egypt, Iran, Tunisia, Nigeria, Japan, Mexico, Argentina, India, and more. There’s also a solid contingent of Native American artists. It is all somewhat blurry, however, in view of preoccupations with the more distant past as much as with what was novel a year or so ago. Much of the show’s painting, sculpture, video, and assemblage, while well crafted and often flashy in terms of production values, preaches to art-school and urban-coterie choirs. 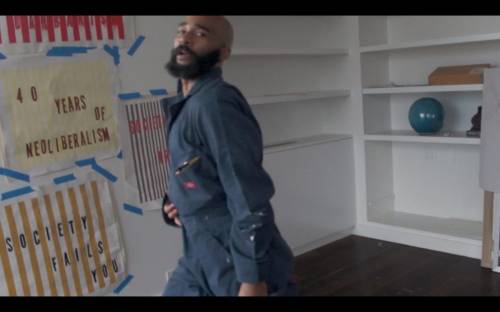 Still from “The Good Terrorist,” by Marie Karlberg, from 2021.Photograph courtesy the artist

The show’s gist could use a watchword related to “avant-garde,” perhaps whatever the French for “sideways-garde” might be. A curatorial team led by Ruba Katrib has exercised considerable finesse while tending toward a semi-underground orthodoxy. They give pride of place to a gaudy video installation by the Mohawk artist Alan Michelson, the subject of a recent feature story in the Times, that laments the historic collapse of the Lenape people’s cultivation of oysters in tributaries of the East River. Go oppose that. Who isn’t pro-oyster and regretful of the Lenape’s displacement? Less overt assumptions of automatic agreement infect even some surreal and abstract works, or so it seemed to me. Am I overreacting? It’s possible, as I scan the show’s illustrated checklist for examples that I could deplore. There’s an ambient restraint despite predominant agitation. What bugs me is a bent that frustrates delectation.

Exactly one artist really enthralled me: the Japanese-born Yuji Agematsu, who, since the mid-nineties, has fashioned tiny sculptures from detritus that he comes across in New York’s streets. Three hundred and sixty-six of these, displayed on shelves in twelve plexiglass cases, memorialize as many recent strolls. Typically snugged into the cellophane wrappers of packs of cigarettes the artist has smoked, they are singly—and all together—exquisite, achieving feats of formal and coloristic lyricism by way of used chewing gum, scraps of fabric, metal fragments, feathers, thread, and very much whatnot. The works convey a homing instinct for beauty in the humblest of materials, and in the most democratic of citizenly activities: walking in the city. It’s easy to imagine them as monuments, thirty or so feet high, when you lean in to behold them from low angles. There’s inarguably a political vibe about Agematsu’s activity, but it’s one that is subsumed by personal devotion. The suggestion of an underfoot Utopia is here and now, requiring no reformation of other people’s attitudes. The works stand in contrast to many in the show that at least seem to toil backward from rote concluding sentiments, to the detriment of unforced pleasure.

A peculiar highlight, harshly disrupting the show’s occasional airs of would-be subversion, is a looped hour-long film by the Swedish artist Marie Karlberg, “The Good Terrorist” (2021), derived from a 1985 novel by Doris Lessing. Squatting in a high-rise New York apartment, ultra-left radicals debate planting a bomb, sure to harm innocents, as a way to dramatize their cause. Some are fanatical, others hesitant. We learn toward the end that the bomb has detonated prematurely, killing the woman who was assigned to place it, in addition to some unlucky bystanders. Hysteria erupts at the squat, shattering the radicals’ comity. Both the actors and the production are defiantly amateurish in a way that, if you go with it, invests intimacy in a talky script. The characters’ discordant emotions sink in, even when appalling. The scenario unfolds casually on the way to seeming nightmarishly plausible. The work is a fable without a moral, evincing Lessing’s uncanny comprehension of twisted humanity. The fidelity of Karlberg and her cast to the integrity of the tale rattles and absorbs. How it befits a show marked by decidedly non-homicidal dissatisfactions hangs in the air. You won’t forget it, wish as you might to do so.

The political is more important than the artistic. Using art to advance causes isn’t bad; it simply surrenders independent initiative, always a fragile affair, to overbearing powers of worldly argument. There’s an ethical heft in the sacrifice, shaming mere aestheticism. I can’t defend my wish for autonomous experience in the face of concerns that acknowledge the real suffering of real people. But I find myself clinging to instances of creativity that eschew rhetoric. At PS1, some very odd sculptures by the young American Kristi Cavataro stumble toward bliss. Gamily geometric configurations of colorful stained glass are mounted on walls or stand knee-high on the floor. There’s a whiff of nostalgia for Art Deco, but the pieces are subject to unprecedented ingenuities of form and mysterious pressures of feeling. Only the artist’s desire justifies them.

Full disclosure: this is vaccinated me speaking, art-starved during my ongoing exile from the city since 2019, when my wife and I had to retreat upstate after a fire in our apartment building (still under repair). We thus missed New York’s share in the pandemic, its summer of protests, and firsthand contact with fellow-culturati. Now my pent-up craving for gratuitous transcendence disgruntles me at the PS1 show. I want a reëngagement with art history that speaks to personal drives rather than to programmatic discontents. The show’s neo-Surrealists and abstractionists are too miscellaneous and hermetic to do more than gesture in a compensatory direction. 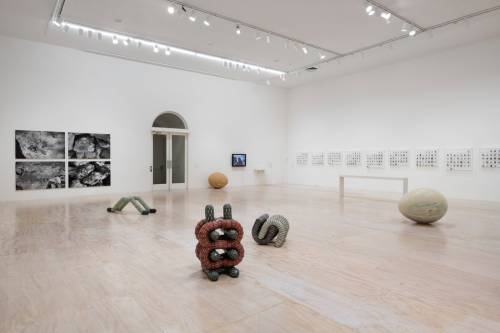 Must ideology define us? Can we demur from one extreme without implicitly being lumped in with its opposite? The art world has become an aviary of miners’ canaries in this respect; there is a near-certainty, whatever you do, of offending—or, anyway, disappointing—somebody. The PS1 show takes what has seemed the safest position, one that identifies cultural legitimacy with obeisance to supposedly unexceptionable opinions. The introductory text asserts that “we must push against colonial borders and address Indigenous geographies.” Who, pray tell, is this mighty “we”? Strong, historically grounded works of authentic complaint by the Seneca artist G. Peter Jemison prove plenty entitled to the first-person plural. Beyond that, however, the curators’ presumption of in-group prerogative edits not the panoply of current art but the makeup of its audience. (Don’t like it? Get lost.) Can we do better by accepting art’s limits as a force in the world?

“Poetry makes nothing happen,” W. H. Auden observed, but life without poetry is apt to be pretty bleak. How about basing value in joy and letting agreement and disagreement see to themselves? In the short term, seeking disapproval, as “The Good Terrorist” does, would seem to be the most availing escape hatch to freedom. Only doing things that one is not supposed to do and saying things that one is not supposed to say promise relief from a climate of stagnating sensibility. Being disreputable beckons. Open up. Reinstate surprise. ♦

Previous : Paul McCartney on Writing “Eleanor Rigby”
Next : The City’s Only South African Restaurant and Bar