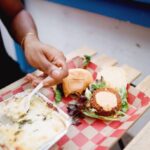 Crab Boils, at the Crabby Shack and Sup Crab

Care for some crab? You’re in luck: there are now dozens of crab-boil restaurants in the city—and scores around the country—where you can eat a bounty of crab legs, and shrimp and crawfish and lobster, boiled and sloshed in butter and some medley of spices, served in a plastic bag, to be cracked with your own plastic-glove-encased hands and devoured, along with any number of fried foods and brightly colored alcoholic drinks. But long before these restaurants, many with an Asian-Cajun bent, began popping up all over (seemingly overnight, at some point in the past few years, in a wave possibly set off by Vietnamese American entrepreneurs in the South specializing in Cajun crawfish), there was the Crabby Shack, a sweet little spot on Franklin Avenue, in Crown Heights.

Perhaps one of the reasons that the Crabby Shack, a counter-service restaurant that offers all manner of crab, feels so pure in purpose, so true to itself, is that it was born of memories of crabs past. In 2013, Gwen Woods had been working in A. & R. at Sean Combs’s Bad Boy Records for two decades, and Fifi Bell-Clanton had been a fashion stylist for about as long. They both missed the crab they used to eat: for Bell-Clanton, in Philadelphia, at such neighborhood spots as Baltimore Crab & Seafood, Bottom of the Sea, and Mr. Crab; for Woods, in the Chesapeake Bay area, brought home by her father from Virginia. 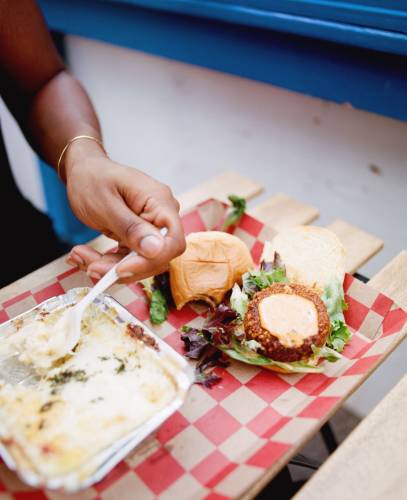 The Crown Heights restaurant, which opened in 2014, offers a convincing argument for crab as an any-day indulgence.

Amazed by New York City’s lack of crab places and looking for a career change, they put together a business plan and, in 2014, opened the aptly named Crabby Shack—casual and beachy, with a nautical design and welcoming service. As Bell-Clanton told me the other day, they wanted people to “feel like they were being transported to a destination in Nantucket or the South of France or Miami.”

The pandemic proved to be a difficult test—they operated for stretches with limited crews and recently added a takeout window for ease of to-go orders. But the Crabby Shack was one of the few crab restaurants that stayed open through the pandemic, and it gained a new customer base as a result, offering a convincing argument for crab as an any-day indulgence. On a recent Saturday night, a steady stream of diners gathered at outdoor tables, sipping I.P.A.s from the fridge and feasting on crab rolls (perfectly seasoned in a subtle garlic-butter sauce, generously heaped on toasted Martin’s potato rolls), crab-leg clusters (elegant, clean-tasting Alaskan snow crab steamed then swirled in garlic butter, or fat, succulent Dungeness, surprisingly easy to crack, in creamy curry sauce), crab-avocado B.L.T.s, luscious crab mac and cheese. 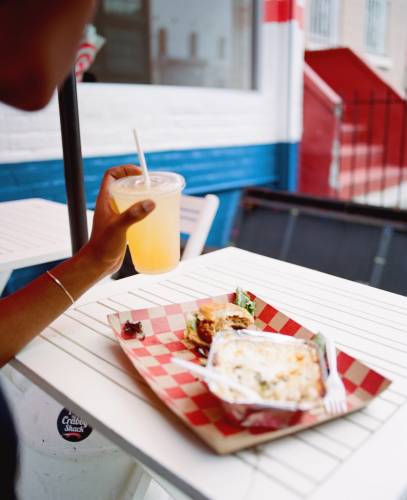 In addition to crab rolls and crab boils, the menu includes crab cakes and a luscious crab mac and cheese.

“Now that so many crab restaurants are opening,” Woods said, “we’re competing with five other restaurants in the neighborhood. Crab is now a thing. It’s exploded.” One silver lining, for Woods and Bell-Clanton, is that their finesse with seafood and their savvy regarding the culinary Zeitgeist—their menu includes a popular lobster roll and a hybrid “clobster” roll, with both crab and lobster—has earned them a coveted vender slot at Barclays Center, and a booming lobster-roll-delivery gig via Goldbelly.

Meanwhile, at Sup Crab—a mini franchise among the city’s now legion Asian-Cajun crab places, with branches on the Bowery and, recently, in Greenpoint—the crab gets a Sichuan twist. Sup Crab offers two staple Cajun sauces (mild tomato or spicy) with its seafood boils—a mix-and-match choice of shrimp, clams, baby cuttlefish, crawfish, lobster, and snow, king, or Dungeness crab—but it’s the restaurant’s Sup Crab House sauce that’s worth seeking out. A blend of butter, garlic, and ground Sichuan peppercorn, it starts as warming and ends up thrilling—an excellent accompaniment to tender, fresh king crab, extracted from giant legs snipped into manageable pieces, the better to swipe through the sauce. Paired with a Purple Galaxy cocktail, made with vodka and pea-flower syrup, and tangy Cajun-sausage-studded fried rice dusted with more magic Sichuan peppercorn, it’s the party we’ve been waiting for. (The Crabby Shack boils $14-$42. Sup Crab boils start around $20.) ♦

Previous : Simone de Beauvoir’s Lost Novel of Early Love
Next : ‘Our Life is On Hold, No Certainty About Anything’: Afghans Live in Fear as Taliban Targets Panjshir