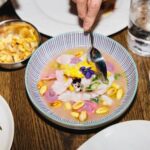 Although I can’t promise that every night at Contento, a new restaurant in East Harlem, is a party, I can report that, on a recent Saturday, around 10 P.M., when several patrons began to belt out “Seven Nation Army,” by the White Stripes, an employee rejoined by playing it on the sound system, inspiring an impromptu dining-room-wide rave. The following Tuesday, someone was marking another year around the sun; a rousing sing-along to Stevie Wonder’s “Happy Birthday” ensued. 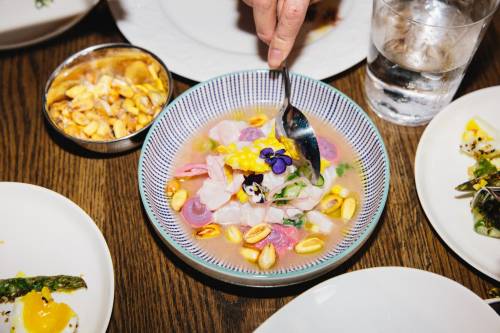 There is much to celebrate at Contento, whose name is a Spanish cognate for “content,” as in “happy”: the opening itself, long delayed by COVID and longer dreamed of by its co-founder Yannick Benjamin, an accomplished sommelier and restaurant veteran (Le Cirque, Jean-Georges); Benjamin’s thoughtfully curated, internationally sourced wine list, with a wide range of prices; a Peruvian-inspired menu from the chef Oscar Lorenzzi (a native of Lima who once ran the kitchen at the Waverly Inn), featuring such dishes as ceviche clásico and “quinotto,” i.e. quinoa prepared like risotto—nutty, creamy, and brightly jewelled with fava beans and sweet peas.

But Contento’s undercurrent of joy seems especially attributable to the restaurant’s unusual commitment to inclusivity. In 2003, at the age of twenty-five, Benjamin—raised, in Hell’s Kitchen, in a family of French immigrants who worked at restaurants including La Grenouille and Lutèce—was confined permanently to a wheelchair after a car accident. Though he didn’t let paraplegia stop him from pursuing the ambitious career he’d already begun in food and wine, he faced no shortage of physical challenges, plus a great deal of stigma. 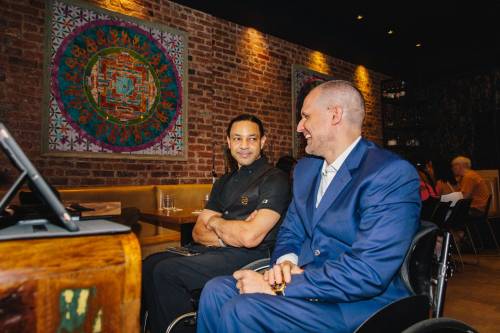 Yannick Benjamin (right), one of Contento’s co-founders, is an accomplished sommelier who was permanently confined to a wheelchair after a car accident in 2003. His partner George Gallego (left), the founder of an organization called Wheels of Progress, was Benjamin’s mentor before they went into business together.

Benjamin and his partners designed Contento’s small dining room, quite subtly, to accommodate both guests and staff members with disabilities. There are wide passageways between tables built slightly taller than average to fit wheelchairs, a handsomely curved bar bifurcated into two heights, and a roomy bathroom with an enormous, easy-sliding door. Adaptive flatware—intended for use by, say, someone with quadriplegia or A.L.S., with adjustable metal rings that make handles easier to grip—is available upon request.

Benjamin, a seasoned para-athlete, wheels effortlessly around the dining room and the sidewalk patio, a customized wine tray on his lap, making recommendations and pouring tastes with a laid-back manner belied by his personal uniform of crisp suits. Of the categories on his list—Wines of the Ancient World, East Coast Terroir (including a sparkling blueberry variety from Maine)—the most intriguing is, perhaps, Wines of Impact. These bottles come from winemakers who are in some way marginalized: a smooth Viognier from Kishor Vineyards, in Galilee, Israel, staffed by people with intellectual disabilities; a Pinot Noir from Kitá Wines, a vineyard on Chumash land in California’s Santa Ynez Valley, run by a Chumash woman named Tara Gomez. 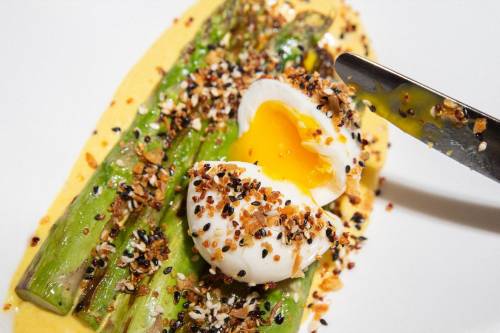 Roasted asparagus on a bed of whipped spicy ricotta, topped with quinoa crumble and a soft-boiled egg.

Before the car accident, “I was a six-foot-two white guy,” Benjamin told me. “It’s incredibly humbling to go into a situation like where I am now, in a wheelchair, paralyzed for the rest of my life.” In the wine world, he said, “I stick out. I’m different.” Contento’s location, a forty-minute “push,” as Benjamin calls wheelchair travel, from his home, in the South Bronx, reminds him of the diverse Hell’s Kitchen of his youth. Lorenzzi’s food, too, bridges cultures.

A comforting entrée of shaggy short ribs over saucy peanut udon noodles, dusted in togarashi, highlights Nikkei cuisine, a result of Japanese immigration to Peru in the first half of the twentieth century, as does the excellent Kurobuta (a Japanese term for Berkshire pork) katsu, served with spicy daikon slaw and yuzu aioli. Lorenzzi’s devilled eggs, laced with a punchy, acidic hit of ají amarillo, a mild, citrusy chili essential to Peruvian cooking, link his roots with the American South. Contento sticks out, entirely on its own terms. (Dishes $8-$31.) ♦

Previous : Google is facing yet another major antitrust lawsuit
Next : These immigrants have one shot to come to the US. But Biden has to act.