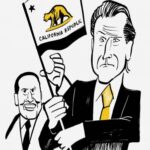 California’s Recall Is a Blow to Democratic Change

Since 1911, when a recall amendment was voted into the California Constitution, there have been a hundred and seventy-nine attempted recalls of elected politicians, with eleven earning the signatures required to make it to the ballot. Of those eleven, six have successfully removed officials from office, and of the six just one removed a governor. That was in 2003, when Gray Davis was bounced from his seat in favor of Arnold Schwarzenegger—the first but not the last orange-colored strongman to rise on fulminant political winds, and a guy whose candidacy seemed a buff embodiment of the question Well, why not? In his acceptance speech, the Governator-elect was reverent. “Thank you very much to all the people of California for giving me their great trust,” he said. “It’s very important that we need to bring back trust in the government itself.” 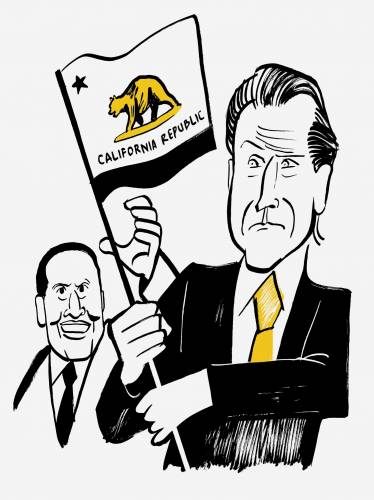 It was a nice thought while it lasted. September 14th brings the spectre of California’s second gubernatorial recall election, and the man in the barrel this time is Gavin Newsom, elected three short years (O.K., long years) ago, and now applying for the job he holds, with the reward of being able to apply again in 2022, when he’s up for reëlection. Being a governor hasn’t looked like much fun lately, and the stakes out West run high. Not only is California the most populous state in the Union, it has the fifth-largest economy in the world, ahead of the United Kingdom’s, and in recent years it has become the epicenter of what could be called the country’s intellectual mood, being home to such enduring points of interest as Facebook, epidemiology, Netflix, and the Kardashians. “As goes California, so goes the nation” runs the adage (invoked, it’s bittersweet to note, by Newsom, in 2008, when cheering on same-sex marriage as the mayor of San Francisco). The risk now is of that being true. The recall puts alarming strain on democratic norms that already, nationwide, are dangerously frayed.

Newsom’s odds of holding his seat in September’s special election have been narrow: recent polling has the Governor ahead, 50.6 per cent to 46.3 per cent, according to a late-August analysis by FiveThirtyEight. The offenses that necessitate his removal, as the recall’s mostly Republican ringmasters tell it, are various and somewhat vague. Newsom is said to have been insufficiently supportive of business during the pandemic. Many residents find California’s taxes and unemployment too high and its housing supply too small. Some consider his wildfire response weak; some resent his decision to release state prisoners at the tail end of their terms or with serious health risks, to stem the spread of COVID-19 in overcrowded facilities. And there’s l’affaire French Laundry, in which, last fall, the Governor ignored his own pandemic guidelines and went to a birthday party at a super-fancy Napa restaurant. (Let them eat ramps!) These are formidable complaints—the kind that accrue to every official at the end of every term, when citizens choose whether to vote the bums back in or boot them out.

What they aren’t is a leadership emergency. We know, more than ever now, what gross incompetence or personal abuse looks like in executive roles. Newsom displays no evidence of either, and his tenure hasn’t been empty of feats. He finally put a moratorium on death-row executions in California, and committed an unprecedented twelve billion dollars to homelessness-alleviation projects (with another ten billion for affordable housing tacked on). In the earliest days of the pandemic, California dodged the fate of states such as New York, in part because Newsom was the first governor to declare shelter-in-place. The business costs of such restrictions? In a bad year nationally, it’s hard to claim they were inordinate, given the nearly seventy-six-billion-dollar budget surplus Newsom says California pulled in this year, much of it from taxes. Even at its worst, his record has been the best a politician can hope for: mixed.

So—to the booth. Voters this month face two questions. First: recall Newsom, yea or nay? Then: if he’s out (the recall needs a majority of the vote, at which point the incumbent is eliminated from the running), who should replace him? Forty-six candidates, including Caitlyn Jenner, aspire, but the front-runner is Larry Elder, a conservative talk-radio host and outspoken Donald Trump supporter, who believes it is unfair to hold the former President responsible for the events of January 6th. His proposals reject statewide mask and testing requirements, renewable-energy programs, and criminal-justice reform. Elder is not insensible to homelessness, and proposes to solve it by waiving California’s Environmental Quality Act, which mandates disclosure about the environmental impact of most housing developments. He has the rare distinction of being both anti-welfare and anti-wage, explaining to the McClatchy news agency this summer that “the ideal minimum wage is $0.00.” And he leads the field by about ten points after having raised nearly five million dollars in the first several weeks of his campaign—pretty generous, from folks who start at zero bucks an hour. With the recall split into two questions, Elder doesn’t need more votes than Newsom to sail to victory; if Newsom is out, Elder is likely to be in.

Dive-bomb the governorship, take the biggest vote-getter out of the running, and jam your candidate into the vacuum: it is hard to conceive of a more cynical plan from extreme conservatives trying to control Sacramento, or a scheme more damaging to the premises on which democracy runs. If the recall works, it will be because those premises are weak already, anti-institutionalism having become something of an institution in itself. Whether raiding the Capitol because we don’t like an election result or demanding a vote now because we can’t fathom waiting until next year, we are approaching a point at which there’s just one button left in politics, the big red one that says “EJECT.” We press it; things move; we begin from scratch again.

As far as change goes, this is the most impoverished kind, because it builds on nothing and leads nowhere, and it clears no space for an enduring public voice. The central tenet of our public institutions is that our fellow-citizens are in the game for the same reasons we are. There are voters we’d hope never to meet at a picnic, but, if their chosen voices prevail on Election Day, we give them their full term, because we want the same when our time comes around. A vote against the recall strengthens democratic norms and institutions, but it also preserves the possibility of real change. And that includes the right of challengers to return next fall and vie against the Governor. May the best candidate win. ♦